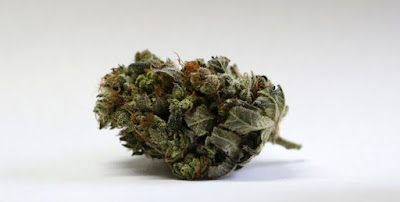 Cannabis is a growth industry. The big winner in yesterday's election was pot. Today Gov. Jerry Brown awoke destined to become a drug lord bigger even than Pablo Escobar. If the trailing 5-year chart of Altria aka Phillip Morris USA is any indicator, marijuana will to become one of, if not the, largest recurring cash crops of all time in the United States.

California has a strong track record of absconding with successful tech (Apple taking the Xerox mouse, Intel "borrowing" Digital Equipment Corp designers, Oracle perfecting IBM database software.) Nowhere else in the world has made tech theft a cottage industry better than the giant corporations in Cali...and the trend will continue with pot.

After becoming legalized for recreational use most prominently in Colorado and Washington, look for the proverbial bloom in closely related "partners," like fertilizer companies, payment processors, accounting software, and legal services. And how about just pure product revenue alone? Think big, no even bigger.

The Prop 64 ballot measure described to voters projected $1B in annual revenue, but the authors of this bill must have been getting high on their own supply. Lucid math figures indicate if Colorado is now tracking yearly at $3.2B, California will do somewhere north of $1B per month.

For the record, this blogger vehemently opposed Prop 64 and (proudly) is considered the local neighborhood "Narc." From an economic standpoint, however, passage of Prop 64 should have several immediate effects; massive tax revenues that politicians will never want to relinquish and the reduction (elimination?) of drug cartel shipments of pot into the United States.

As with the fall of Prohibition, a/the major source of revenue for organized crime ceases to be profitable and the state becames the uber-drug lord. The Kennedy's simply transitioned quite adroitly into politics after Old Joe's Canadian Whiskey running operation ceased to be profitable. Funny how dynasties are born.

The combination of tech development and pot legalization will probably now vault California, in terms of GDP, into the Top 5 economies of the world by itself. This makes Gov. Jerry Brown second to the President in power (he who holds the gold...)

These are a whole host of problems that will need to be addressed, funded, studied, legislated, and enforced. Maybe the DEA in California will become the Drug Enactment Agency?

Luckily for big government, that $1B in monthly revenue will help fund some of the cost, because remember the the first line of this post. Cannabis is a growth industry.
Posted by Tom Rapko at 12:12 AM