Assuming the Fed triggered a recession with their rate hike on December 16th, 2015 the above chart helps provide some idea of what we're in for over the coming months. The real question going forward is whether the Fed will continue to deny the state of the global economy, trading of the 10-year Treasury, lack of inflation, and milquetoast quality of job creation. At this point, it is a a 50/50 chance that they will raise another 0.25% for the March 15/16 (beware the Ides of March!) meeting.

Given that tomorrow is "Super Tuesday"in the United States, it is conceivable that to protect their jobs going into an election cycle the Fed in fact DOESN'T raise rates as this would further exacerbate the current situation.

The reality is the global economy is like an airplane pulling up the nose and just about to stall. Growth is so anemic that is actually feels like a recession already in many parts of the world. The United State included.

Probably the most prudent course of action, oddly enough, would be for the Fed to acknowledge their mistake AND hike again in March while also stating that they are DONE raising rates in 2016.

This would have multiple beneficial effects. First, it would put a nail in the coffin to the US economy in the short term and thereby let the steam out of any bubble in the stock market. In the short term this would be bad; but from a long-term view this would add certainty to the rest of the year which would be vital.

Second, playing financial poker with the Federal Reserve is a dangerous game; on a global scale it is borderline insanity given the massive power the Fed wields. Better for them to raise rates here 0.25% so they don't lose face in the eyes of the world, put their jobs at risk for a new Fed board in 2017, and then let the USA economy stall then begin a healthy recovery.

The greatest challenge at this point would be a strong US dollar, which would have tremendous impacts short-term on US corporations.

The probability of the Fed raising rates at the March meeting is decreasing by the day though. There is just too much political capital at risk and the entire Fed board risks losing their jobs if they mangle another hike; the safe bet here is an acknowledgment that "the global situation has changed" (due to the Fed's 16 Dec 15 move no less) and that "we will consider further tightening when data suggests our inflationary targets are met." In their own self-interest, the Fed will play it safe.

I expect gold to further its rally and stocks to climb back over 17,000 in the coming weeks. If we see some sort of definitive wording from the Fed, there well may be a massive tick to the upside here as stocks are typically leading indicators (the recession was already priced in starting with the sell-off into 2016.) 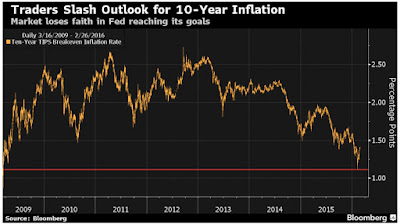 Investors should prepare for 1% 10-year Treasury Bonds as the global slowdown continues and many nations now are looking toward negative interest rates.