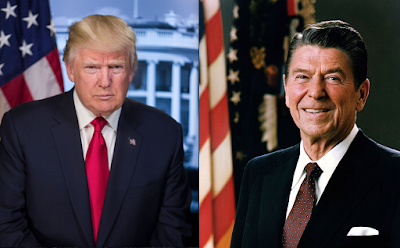 On the surface it might not seem likely given the significant divergence in their public personas, but Donald Trump might just be Ronald Reagan 2.0

Behind the media's candelabra, there is a distinct similarity for the love of America and laser-focus on defense, infrastructure, and big deals between Donald Trump and Ronald Reagan. Obviously both are Republicans, but both weren't scions of the GOP establishment. Rather, both Presidents started off in that other party...the Democratic one, which left them and millions of other moderate Americans behind.

If history is any indicator, Reagan 2.0 should continue to be a boon for stock market investors as the government will ramp up spending on defense and infrastructure, while reducing regulation, lowering taxes, and putting America First (read as smart trade negotiation.) On the proverbial back of the envelop is the calculation of Dow 25,000 by the end of President Trump's 1st Term; there are estimates of Dow 30,000 too, but those make some really difficult assumptions.

It is going to be nearly impossible for President Trump to accomplish everything he sets out to do in his first term. Nevertheless, if President Trump can navigate the tricky deal of providing health care coverage for millions of Americans while simultaneously lowering taxes, reducing regulation, and securing our borders he'll have succeed in the bulk of his goals. Even on the belief that he will accomplish just some of these monumental tasks, the stock market has risen some 3,000 points in the past 4 months.

Investing in America has never seemed brighter; companies are regularly beating their earnings expectations and a pipeline of new incentives are on the horizon. Corporate tax reduction coupled with the ability to repatriate trillions from overseas is likely to bolster the corporate bottom line immediately, while the effects of ongoing, material reduction in regulations will provide intrinsic value which will materialize over time.

Financial farmers are in essence buying into the American Dream at a ripe time. Further prosperity via innovation and growth in the underlying fields of business should provide a bumper crop for years to come. How do I like them apples? I love 'em! 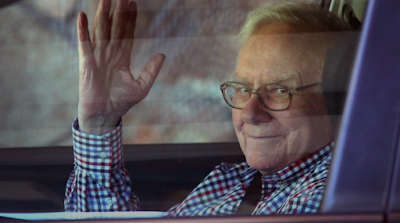 Wall Street might just be the most vilified business, right after politics of course. Warren Buffett said as much today in his eagerly awaited annual letter to shareholders, calling members of the financial world "monkeys." Lest we forget dear readers, the 1956 Buffett Partnership Ltd. pioneered one of the highest fee structures in existence; a flat 2% for assets under management PLUS an additional 50% performance fee of any profits above a 4% return.

Warren contributed $100 (one hundred) dollars of his own money from his savings of $174,000 in 1956 to the total partnership capital of $105,100. Over the next 14 years the Buffett Partnership did very well, but Warren Buffett did EXTREMELY well. Although it is impossible to determine exactly what his take-down was, according to multiple sources his personal profit was along the lines of $25,000,000. This grub stake would be leveraged into the on-going fusion of Berkshire Hathaway and GEICO into the modern day holding company. There was just one problem, his partners.

In 1969 the partnership was shut down, which coincidently coincided with the the consolidation and formation of the present day holding company of Berkshire Hathaway. Please note fellow financial farmers, at this critical juncture Warren advised his partners that there weren't any viable investment opportunities in the future and disbanded the partnership. His money, however, went into the holding company. This is probably one of the most important facts glossed over by the sycophant business media; Warren Buffett "advised" all of his limited partners to a magnitude almost incalculable, but I'll give you a back of the envelope number: $420 Billion in missed opportunity. It probably ranks as one of the greatest swindles of all time.

Today Warren Buffett is depicted as a grandfatherly investing sage championing index funds, although he has nearly his entire net worth in Berkshire Hathaway stock. Berkshire has the ability and desire to negotiate sweetheart deals (aka shareholder extraction) the likes of which could never be accomplished by ordinary mom and pop investors. 2008 was a seminal extraction year for Berkshire, it was able to succor dozens of deals; Goldman Sachs, General Electric, Dow Chemical, Bank of America, etc. all paid homage (on the backs of their shareholders) to secure funding from Warren.

History, in its purest form a trade blotter, reveals all; Warren Buffett changed career paths in the early 1950s from a stockbroker to partnership not to benefit clients, but rather to harness his "unique" investing ability as the son of a sitting Congressman, which coincidently paid one of the highest fees in the financial industry. At the juncture when his partnership provided an adequate stepping stone to leapfrog into total control of assets in which he could use the float from GEICO and simultaneously extract value out of those glorious old spinning mills Berkshire and Hathaway he didn't hesitate.

Without a doubt, Warren Buffett is one of the greatest investors of all time; his ruthless pursuit of profits is virtually without equal. Berkshire Hathaway has a market cap of some $420 Billion and generates billion in yearly profits. It is the the 4th largest company in the world. Buffett has extracted vast value from many, many companies via their existing infrastructure, brands, and workers; surely he is the leader of the monkey troop.

The irony in Warren's investing words and actual behavior is summed up simply by the residents of Fall River, Rhode Island and New Bedford, MA...the respective headquarters of Warren's launching pad for holding company Berkshire Hathaway...there are no bronze statues to this man, just crumbling factories and lost American jobs. 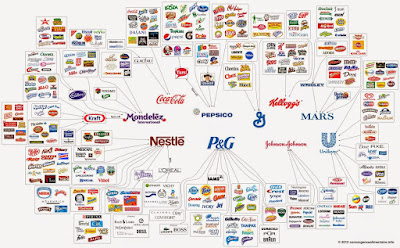 As the above graphic illustrates, only about a dozen global conglomerates control nearly every major food & beverage brand in the world; the economies of scale in terms of their ability to manufacture, market, and distribute are undoubtedly the purest definition of a monopoly. The big winners are the direct owners, the losers are phased out workers and ultimately consumers that become price-takers.
Posted by Tom Rapko at 3:34 PM No comments: