I am not a crypto fan for a variety of reasons; for one it feels like a pure Ponzi scheme, for another it has no ties to a physical commodity (think gold standard), and it can be seized electronically at will by almost any major government...but there is one trait that is very, very interesting about Bitcoin: The IRS wants to know on your 2020 1040 "At any time during 2020, did you receive, sell, send, exchange, or otherwise acquire any financial interest in any virtual currency?" Unfurl the red flags.

Why does the Deep State want to know whether you have virtual currency? Well dear readers, taxation is a by product of any benefit. This first example of this phenomenon in the United States sparked the Whiskey Rebellion in 1791. Whiskey had become a store of value; tilled fields planted with rye ultimately harvested and distilled into whiskey became in many respects this country's first portable, stable, and universal currency. Naturally the government wanted to tax this store of value. Hence the brewing discontentment which resulted in the Whiskey Rebellion.

Ultimately a paper currency was introduced which was backed by silver and gold; this metallic standard lasted well into the 20th century until under the Nixon administration the gold standard was revoked in order to pay for the escalating costs of the Vietnam War. The result was disastrous for working Americans as their purchasing power collapsed and inflation raged. The amount of paper currency, fiat money, in circulation exploded. 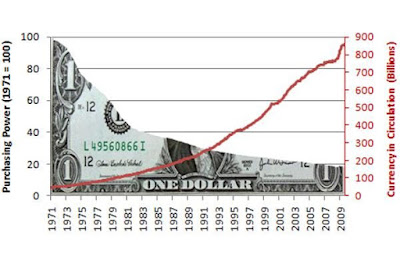 Gold has been a universal store of value for over 5,000 years...maybe even longer. "God's money" gets its value from the toil required to obtain it; gold is rare, it cannot be made by man, it is portable, and it looks really cool too! Almost every civilization that had some access to gold made it the backbone of their civilization's economy; even today vast hordes of gold are stored by central banks around the world.
Virtual currency offers central bankers even more of an advantage over paper money; not only can a limitless supply be created, but it can be tracked, seized, and controlled with ever more sophisticated means; virtual currency is big data's dream scenario...information about consumers can be collected en masse and interesting scenarios develop such as migration patterns, spending habits, and legal status.
As adoption becomes mainstream, the question arises with a theoretical limit of 21,000,000 (21M) Bitcoin how high in USD can it possibly go? An investing analogy to the Great Tulip Bubble was that during peak mania, a single bulb could purchase a house...so assume a nice house and we're talking about possibly $1M. Tulip mania did not end well, and I suspect Bitcoin will also end poorly. 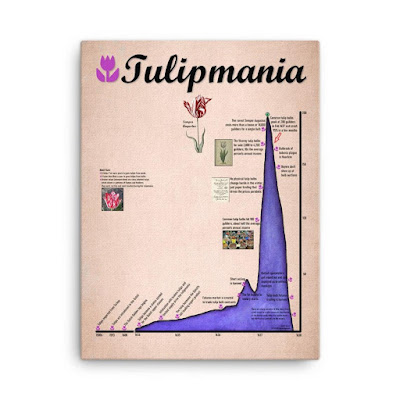 If paper currency is just fiat money, tulips are just flowers, and Bitcoin is potentially a Ponzi scheme what is an investor to do? Felix Zulauf from this week's Barron's had a very interesting take: "Millennials are buying Bitcoin instead of gold...I don't believe that Bitcoin will ever make it as money used in daily payments. It is too complicated, the price is too volatile, and "mining" it requires too much energy. But as long as people think Bitcoin as a safe store of value, the price could go higher, and it could become a mania."
Finally, as Steve Jobs famously used to end his product launches..."one more thing." Research indicates that Bitcoin is an environmental disaster given the amount of energy resources it consumes to "mine" the virtual currency and where does some 20% of the world's Bitcoin mining take place? China's Xinjiang region, "where the U.S. government says a genocide is occurring."
A possible solution? Let's get back online with the gold standard by digitizing gold. I hope the next craze in virtual currency is GoldCoin. 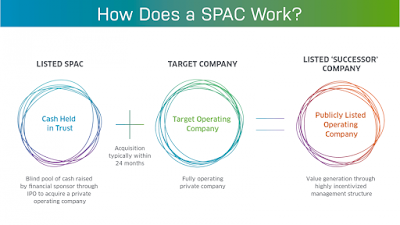 A Special Purpose Acquisition Company (SPAC) model is turning the traditional Wall Street monopoly on Initial Public Offering (IPO) deals on its head...and heads are rolling in angst. Consider the recent hit piece by Bloomberg "Investors in SPACs Need to Know the Real Deal." Or any of the various rants by Jim Cramer on CNBC about why he doesn't like SPACs. But wait, a host of recent traditional IPOs (those birthed by traditional Wall Street investment bankers) like DoorDash, Airbnb, and most recently Bumble all soared on their first day of trading. Great for retail investors, right? Not so much.

(Intentional?) Mispricing by investment bankers has led to massive single day pops on issue, leaving the IPO company in a lurch (yeah, those are dollars they left on the table, rather than going into corporate coffers) while the investment bankers make a killing (all the money is made between the lines) for a service that could have been accomplished via a direct listing like Palantir accomplished or...gasp...via a SPAC. Oh yeah, one more thing...how about all those retail buyers (read as the general public) who had to pony up to pay the premium price for a new issue? Hosed. Their only hope now is to bet on a high price going higher.

In a raging bull market, proximity to the deal flow is vital. Everyone knows this, that's why there is so much demand for IPO deals. That's why the margins are so fat. That's why traditional investment bankers crush it. It's an easy algorithm, get as close (early) to a deal of a good issue as possible. Retail investors know this well. And about a year and a half ago a SPAC launch occurred that first kinda appeared under the radar...Diamond Eagle Acquisition Corporation was to acquire SBTech and DraftKings. This seminal event ushered in a new wave of investing for the retail investor and the small company. It was a renaissance moment. Since the DraftKings deal went public, literally another hundred SPACs were launched. More are on the way.

Are SPACs risky? No doubt. Like any new issue without a track record, investors need to be cautious. When owners, founders, venture capitalists, private equity managers, hedge funds, AND retail investors, however, all are on the same page, it definitely seems like the investing world is thinking different (like Steve Jobs advised.) The one player traditionally clear and present, however, is noticeably absent...the investment banker.

SPACs are a great democratizer. And the Bloomberg article is quite right on one point; if investors still want to buy, so be it. One of the great legacies of the previous administration was the creation of an investing environment that put an emphasis on less regulation, less red tape, and more freedom. The result of this philosophy has begun to take root and bloom. The big potential losers are the static, entrenched monopolies which have maintained their status via ever-increasing market size fueled by bolt-on deals...who just said Microsoft...and bales of cash to lobby DC preventing competition. The big winner? You.

Reminiscences of a Stock Operator

Reminiscences of a Stock Operator 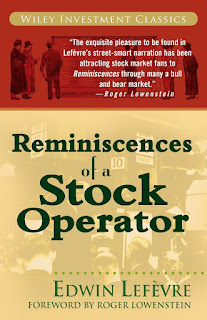 Recent stock market volatility with the GameStop (GME) short squeeze illustrates that there is nothing new under the sun, indeed some 100 years ago Edwin Lefevre chronicled the career of a character inspired by Jesse Livermore. If you've never had the pleasure of reading it, I highly recommend "Reminiscences of a Stock Operator." It is one of the seminal books on trading, risk, and human behavior ever set to typeface.