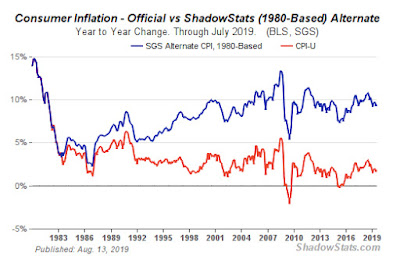 Truflation, a portmanteau I've coined from "True Inflation," is probably in the range of 10-12%, just don't share this information with the U.S. Bureau of Labor Statistics! According to the BLS, inflation in the United States is nonexistent. In fact, conditions are SO benign that it is actually wise to CUT interest rates! Well dear financial farmers, I have a different perspective.

For the past 45 years there has been almost no real wage growth. From about the time Nixon took the USA off the gold standard rampant inflation has devastated the earnings growth of the middle class. And in the late 1980s things got significantly worse in terms of calculating the Consumer Price Index (CPI).

The CPI was changed from a constant cost of living to one where substitutions were allowed. No big deal, right? Wrong. This allowed politicians from both sides to effectively mask the true inflation numbers. Why was this done? Well when you significantly underreport official inflation you don't have to make cost-of-living adjustments to Social Security. Or account for increased pension plan returns. Or worry about the size of the deficit. Fudging the numbers solves a lot of big problems.

Examining the "growth" of income over the past 45 years is another way to take a look at this problem in a pragmatic way; real buying power has barely budged, yet the cost of acquiring the same goods and services has SKYROCKETED! 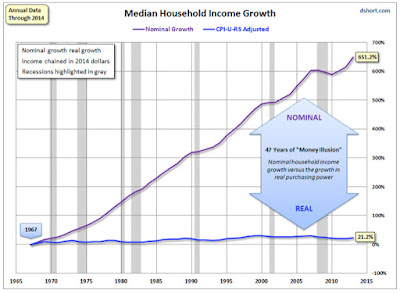 Anything of value in life whether it is housing, education, or medical care to name the "big 3" have increased exponentially. What college student can pay for tuition now from the proceeds of a summer job? Can a family put 20% down on a house after working for just a year? Why would a single medical bill now cripple a family? The answers to all these questions, sadly, is Truflation.

What is an aspiring member of the Middle Class to do? Vote? That obviously doesn't seem to work. Rebel? Hmmm...good luck with that. Earn more? Maybe, but earning more alone won't fix the problem, as the U.S. Dollar loses more buying power by the day and taxes have a sneaky way of eating up even more of any higher income. Invest? Yes!

My argument is the best way to fight Truflation is a combination of earning more and investing, and ultimately funneling as much tax-deferred growth as possible into investments, particularly stocks, real estate, and gold. In terms of stocks I'd highly recommend readers take a look at my "Rapko's Rules" in previous posts. In terms of real estate, well they ain't making any more of it (except in the South China Sea and in Dubai) Take a hard look at quality vacant land, commercial real estate, and single family homes. Finally, gold is a really interesting element. And it has been used for thousands of years for storing VALUE. I wonder why that is...hmmm.

Bottom line? Borrowing costs are going DOWN, but the PRICE of everything is going UP. Invest. 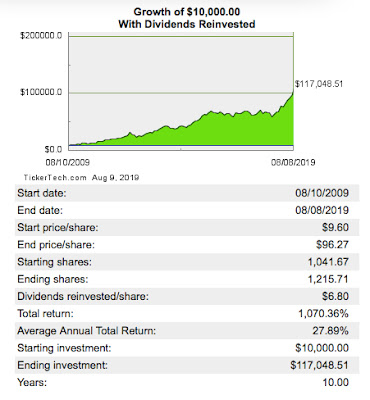 Usually when someone says "invest," what they really mean is "compound." It has often been quoted that Einstein remarked that the power of compounding was beyond human comprehension. That very well may be true, but seeing something visually should offer some understanding of the phenomenon.

Consider the leading image of this post; it is almost an ideal example of what is possible over a long-term (10 years) with a stock that compounded some 1070.36% (ten-bagger in Wall Street parlance) earning the holder a $107,048.51 profit from an original investment of $10,000.

What's nice about this example is that it includes the purchase date and hold date exactly, the purchase price, end price, dividends, and the average annual total return. Those factors are very telling.

Successful compounding almost always involves 3 vital factors: security selection, holding time, and either additional paid-in capital or dividends. These 3 variables, when working in concert, can produce extraordinary results as the above indicates; for every $1 invested the owner received $11.70 in return a decade later. For every $9.60 paid per share in 2009, $6.80 was returned in dividends alone!

These are the growth stars every investor and portfolio manager should constantly be on the look for while screening for stocks. How do you find them? With questions! Does the company offer consumable products that need to be continuously repurchased? Does the company pay a dividend? What rate? What is the growth rate of the dividend? How stable is the dividend? Is this company a monopoly? What's the competition like? Is their product dangerous or subject to regulation?

There's an old adage that Financial Famers like you who read this blog know well, "invest your time before your money." The fruition of these words can be found in results like the above example which can have a meaningful impact on an investor's life both now and in the future.