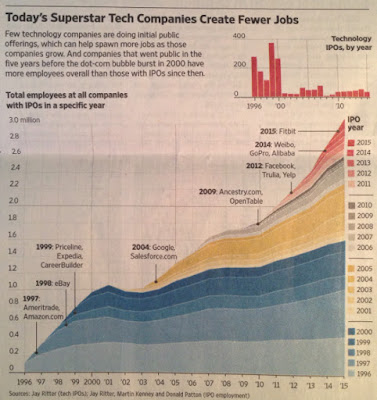 The Wall Street Journal published one of the most meaningful and visually interpretive surveys of the employment picture in the United States today. Coinciding roughly with the passage of NAFTA and the widespread adoption of the Internet in the early 1990s, it portrays the massive disruption of technology, management, and political policy in shifting this country from a manufacturing base to a software-centric service hub.

As anyone who has worked in Silicon Valley for the past several decades will tell you, the Valley has shifted from hardware to software. This megatrend has resulted in massive job losses to cheap overseas manufacturing; spun with rose-hued glasses one could say the United States has spurred global growth and prosperity on an unequaled basis for the past 20 years.

For those wishing to Invest Like A Farmer, the trend of service-based employment and out-sourced manufacturing may have reached its pinnacle, especially as 3D printing and the very machinery has negated the cheap labor rates which caused massive job flows to countries like China, India, Vietnam, and other Southeast Asian labor markets.

With lean-inventory and production-on-demand now commonplace, I predict former manufacturing hubs like Detroit, St. Louis, Cleveland, and other "left-for-dead" traditional manufacturing cities making a strong comeback on the heels of (literally) dirt-cheap land prices, a workforce educated on demand, and the massive shipping moat known as the Pacific Ocean.

As Amazon.com has successfully proven, consumers embrace the concept of sacrificing a little time to get a great product cheaper. An educated, mobile, fluid USA workforce with 3D printing, manufacturing-on-demand, and a diverse skill-set can successfully leverage the Pacific Ocean, dirt-cheap land, and hopefully a political climate that supports them via an "America-first" mentality.