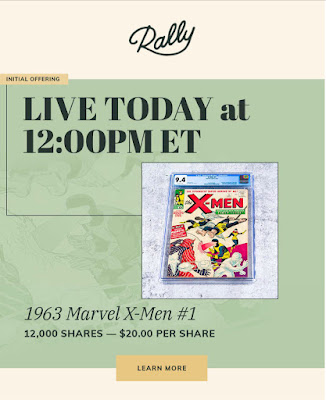 Tokenization of assets is the springboard of capitalism. Ever since the establishment of the Amsterdam Stock Exchange in the early 1600s, the world's first official stock exchange, capitalism has taken flight and created a system of joint ownership of various assets. This allowed for virtually anyone to own a piece of a company without being personally responsible for its fate, yet this owner could share in any potential upside via an increase in the share price or as the early mining stocks in America proved, dividends from said share(s).
Here at ILAF we are always at the forefront of financial technology and innovation. Well kinda. But as financial farmers with a deep respect for ownership of assets that grow large over time, we would be remiss if we didn't talk about the advent of a *new* kind of financial development: tokenization.
Tokenization is the process of splitting either a real physical asset (such as a car, real estate, or even comic book) or increasingly non-fungible digital assets into identical pieces or shares or tokens of ownership. For all intents, what is occurring is a ledger system which is extremely NON-crypto in the sense that there is no ambiguity as to an asset's provenance. Crypto is probably one of the biggest fallacies of all time; it is eminently clear who owns what, what they paid, and when the item was purchased. Fungible assets, however, have anonymity by definition; think gold, physical paper cash, and oil for example.
One massive market that has been overlooked for decades, save perhaps for the avant-garde, haute couture world that Sotheby's and Christie's have built their empires on...paintings and sculptures. People of a certain generation, for generations, have stored their wealth in art. Primarily paintings. But for the past several decades as the older generations pass on and their collections are broken up and reconstituted by others as the wheel of time turns, a new store of wealth has emerged. Composed primarily of what loves were enjoyed in the past, or what loves where unobtainable in the past, a host of collectibles including classic cars, baseball cards, watches, and comic books have emerged.
Why would the comic book emerge as one of the hottest stores of value? Arguably in 1938 with the publication of Action Comics 1, a new generation of art, culture, and value was created with Superman's debut. Batman followed in Detective Comics 27. A host of other heroes soon joined the ranks. And in the early 1960s as culture itself changed dramatically, Marvel Comics launched the Fantastic Four. In quick succession The Hulk, The Amazing Spider-Man, The Avengers, etc. followed. So began the continuity of a medium that has influenced, often defined, culture for nearly a century. Those early pieces of paper are now worth millions. Perhaps billions. What does this have to do with tokenization? Read on fellow financial farmers.
I was recently introduced to a platform called Rally which has successfully tokenized collectibles into distinct pieces of collectible ownership. The implications of this should be vast, as there are a finite number of old goods...ie there are only so many X-Men 1 graded CGC 9.4 (13 to be exact) available in the world. Granted "new" old collections are sometimes found, but they are increasingly rare. Limited supply of high end goods, regardless of the category, usually prove good for their underlying owners over time, especially if there is consistent demand by a growing population. The item becomes a store of value.
Bitcoin is all the rage in terms of tokenization; but the true unleashing of value, in my opinion, will be in the vast untapped value trapped in collectibles...at least as long as the living generation valuing the assets lives; will a Monet always be a Monet? Only if each succeeding generation values the artwork as much, or more, as the previous generation. Unlike bitcoin though, tokenization of collectibles offers the owners a piece of tangible asset; the value, of course, is always in the wallet of the beholder.
Posted by Tom Rapko at 10:17 AM