The Fall of Kabul

The Fall of Kabul 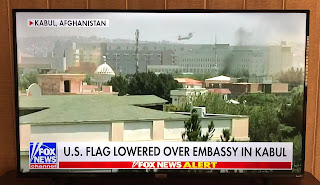 The Fall of Kabul is emblematic of twenty years of failed leadership from the military industrial complex, which has squandered trillions of dollars in U. S. taxpayer treasure and countless gallons of American blood in a wholly unsatisfying result; the complete capitulation of a democratically elected government to an angry horde of barbarians armed with American weapons, driving American vehicles, and cutting a direct path unopposed to the capital two weeks BEFORE America was projected to withdraw.

Who is culpable? The list is long, yet there is an eerie silence emanating from our most "distinguished" politicians and statesman/women...where is John Kerry? Hillary Clinton? Condoleezza Rice? Colin Powell? Do we even have a Secretary of State today? Four Presidents, including the sitting one, haven't released more than a Tweet. American Taxpayers, Veterans, and our Afghan allies deserve better than this...in the coming days, weeks, and months as heads literally roll in Kabul, we should take the opportunity to fathom the impact of this seminal event in our history.

Afghanistan demonstrates the near impossibility of establishing a democracy half way around the world where even waging war is a tenuous task at best. Standing up essentially a new country almost always fails if the wellspring of democracy doesn't flow from within and a coalition of the willing really isn't willing to stay for the long haul...and by the long haul I mean multi-generational transfer of power. It is completely implausible to believe a new democracy can be rooted in a couple decades when the ghosts of previous belligerents still walk the Earth. We still have bases in Germany, Italy, Korea 75+ years after WWII!

Some time in the last administration we decided the mission wasn't actually nation-building, and the goal then shifted to withdrawing. The chaos that ensued is Joe Biden's "Saigon moment," it will live in infamy, as pictures of Afghans clasping to departing aircraft linger in the mind like a helicopter on the U.S. embassy in Saigon. Joe Biden owns this disaster. The weakness and incompetence of this administration is simply staggering. It begs the question, "What else have they completely lost control over?" The border comes to mind.

Now we are left with Operation Afghan Clean-Up...is this administration up to the task? Probably not. Private billionaires, enriched mightily from the military industrial complex, need to act. Bill Gates needs to redirect "empowerment funding" to leasing a fleet of 747s. Jeff Bezos needs to provide logistics support and housing to all our inbound Afghan allies. George Soros and Warren Buffet need to provide incomes to all these brave allies who put everything on the line to help build billionaire fortunes. The days of Ross Perot funding private operations to free hostages should not be simply a legend.

If Afghanistan has taught us anything, it is that leadership matters. In the face of calamity our leadership completely failed. They need to be held to account. Freedom truly is not free. It must be constantly maintained by vigilance and action by those who pay the salaries of these buffoons.