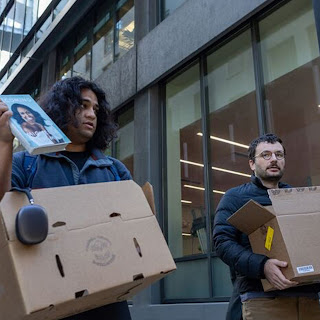 Barring the recent "layoffs" of pranksters Rahul Ligma and Daniel Johnson, the Silicon Valley tidal wave of tech carnage is very real indeed. Assuming 10% of the Valley is laid-off, the economic impact of this bust cycle will be painful.  As the old adage goes, if your neighbor loses her job it is a recession; if you lose your job it is a depression. Time to head for higher ground.
Ten percent might be a significant understatement of what is about to occur in Silicon Valley. Typically these boom/bust cycles wipe out 30% or more of the carrying tech employment scene. To the upside, it also typically spawns new companies, ideas, and industries...but that is far, far down the road at this point. Amazon, Meta, Twitter, and Google are all cycling up MASSIVE layoffs, to the tune of well over 25,000 employees in the "Bay Area," while non-monopolies with less defensive business models are shedding employees like snake skin. The worst is yet to come.
It has been a solid decade since the last wipeout, so data suggests this one will be nasty. For every 1% of the local employment scene laid-off, the resulting real estate, medical, and social services (read as tax base) will be exponentially impacted. Cinderella may have lost her shoe, but when it finally drops that shoe is going to be called "real estate." With the highest prices in the nation, Silicon Valley real estate is uniquely positioned for a collapse with massive tech layoffs on the horizon.
As any small business owner knows, cash flow is king. And each one of these laid-off tech workers is becoming her own business now. And cash flow will dip first into severance, then into savings, and finally into retirement savings to either stay/survive in the Valley or flight to a lower cost of living/higher quality of living area (in the United States or abroad.) Given that the "uptake" (rehiring) rate will be tepid at best, but nonexistent as likely, many laid-off employees will return to their pre-Silicon Valley roots with a bag of cash (in the form of severance, vested options, and real estate sales gains.) Quitting while you're ahead isn't the same as quitting.
Is that Santa Claus flying over? No, that is a laid-off tech worker decamping from Silicon Valley. The first to know are typically the first to act. As with Covid, those who knew first acted first. In this case, those laid-off first have the ability to cash out of their company stock and over-priced Mountain View home first. Oddly enough, the first to go are probably the best off because they can still walk away with a Santa-bag. With the USD at an all-time high against most major world currencies, this decision is a no-brainer. And as everyone in the world has been told, Silicon Valley people are the smartest on Earth.
What does this mean for the typical Financial Farmer eagerly reading this blog? Big picture: Expect tech stocks to continue to be weak and most likely continue their selloff until that last sliding door pinches the last butt out because when the cutting finally stops, then those cost savings will hit the proverbial "bottom line" on corporate balance sheets. Until then, employees that were canned will make the easy choice of bolting to a lower cost of living area with a king's ransom in their savings accounts earning 5% risk-free from US Treasury T-Bills. As usual, Main Street will pay for the hubris and excess of Silicon Valley companies no longer run by founders.
In the next 18-months to 24-months (that's right, 2 years), expect non-founder tech companies with bloated workforces to lose about 25% of their workforces, dramatically reign-in costs (like R&D), focus on their core monopolies, and regain obscene profitability number if they can stabilize revenues. The next cycle after that, or perhaps in parallel, should be the rise of Silicon Valley 6.0. Until then, consider looking elsewhere for reasonable returns on capital.