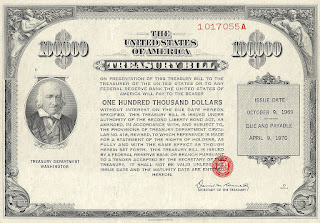 Warren Buffett once quipped that "5% interest rates draw money from the moon." Well dear readers, we are nearly there. Today 6-month Treasury Bills due on 6 July '23 sold for a yield of 4.82%. With the economy in shambles, record inflation, and Big Tech laying people off as fast as they can email, this "risk free" asset has surged in popularity sucking growth capital out of the economy like a vampire squid.
Yes, you are probably losing more in terms of "real interest" due to inflation than gaining on T-Bill rates, but at least you don't suffer the double indignation of seeing BOTH your buying power AND balance going down daily like the stock market. The popularity of a similar bond, the I-Bond, is such that if a proposed program to expand the existing cap from $10K to $100K would most likely cause the stock market to crash. But who don't like some "risk-free" return, right? What is a Treasury Bill anyway?
Treasury Bills were spawned at the close of "The Great War." They are lasting relics of World War I's Liberty Bonds which were needed to finance America's war efforts. Because the country didn't have enough money to pay back all the Liberty bondholders, the Federal Government got the idea of rolling those bonds into NEW bonds. These new bonds became modern day Treasury Bills (up to 52 weeks in duration with established auction cycles and a defined bidding process.)
The new auction and rolling approach would ladder out the debt. And we sure have a boatload of debt. $31,000,000,000,000 of it at the Federal Level. By the time you are done reading this blog post, another $3M dollars in interest will have accrued to our National Debt.