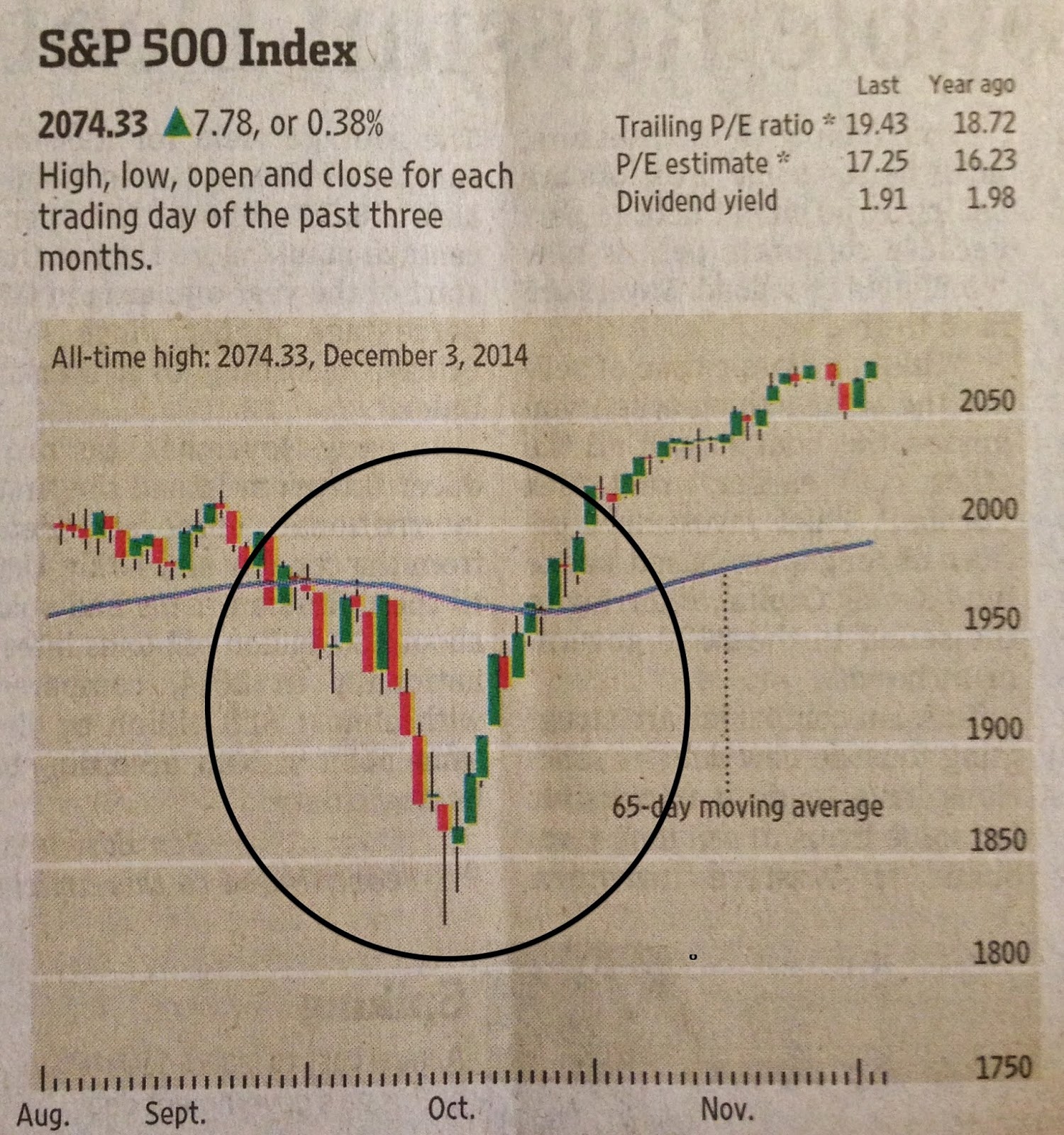 Well my fellow financial farmers, it was just a short 45 days ago when we were (once again) in the throes of another doomsday scenario; ebola, ISIS, mid-term elections, and oil still in the triple digits. What a difference a month-and-a-half makes; Dow record, S&P 500 record, and virtually all of the above concerns have dissipated.

In terms of historic "Vs" this one will probably go down in the stock market annuals as one of the most defined patterns of a sell-off and subsequent recovery. To put it plainly, this "V" is the proverbial textbook example. (It might even be in the next textbook!)

What can we pull from this "V"? A couple observations; after a multi-day decline leading up to the free fall that constructed the back edge of the "V," volume increased markedly, the advance-decline ratio fell precipitously, and just as the "V" marked its bottom the market recovered to close well-above its low for the day. The market actually then opened up lower the following day, but closed higher. The "V" notch was in and off to the races we went!

Essentially from Oct. 16th until yesterday we have seen an unrelenting move higher, with only a handful of modest down days. So just over 200 S&P 500 points in 45 days. To put this in another perspective, if you only invested for 45 days this year you would have notched an 11.3 return (the high-end of the average YEARLY return!)

Take note those who wish to Invest Like A Farmer; great returns can OFTEN be had by having seed capital ready to deploy at a moment's notice if your "buy" scenario emerges. Many pundits disparage investors who keep dry powder (cash) at the ready, but reality dictates that the "opportunity of a lifetime" comes around a lot more frequently than that adage suggests. Be prepared.

The big question, what's next? Given the macro climate I suspect analysts are being conservative on their existing 2015 and 2016 S&P 500 earnings calls. This leads me to believe we have a very good chance of not only meeting but possibly exceeding my call of Dow 20000 by the end of 2016.

In the meantime, I think the existing "up-trend" will moderate into the holiday season and pick up again into the New Year; a key question is whether vital elements of this macro environment (low interest rates, cheap oil, and political gridlock) will hold into 2016. Additionally, will retail investors return to the markets and deploy some of the cash currently sitting on the sidelines? All of those factors would prove to be bullish catalysts.
Posted by Tom Rapko at 9:36 AM