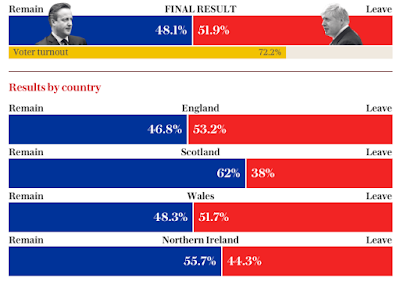 The United Kingdom becomes the first member of the European Union to voluntarily leave the group as a historic referendum pitted pro-EU loyalists against a rising wave of voter angst upset with being marginalized socially, politically, and economically from globalization. Last-minute attempts failed to unite the country and voters choosing to leave came in strong numbers.

The initial effects have been a massive sell-off in the global stock markets, with Asia, Europe, and the United State all down significantly. Almost every currency also fell against gold which enjoyed its best day in years, hitting a 2-year high in the wake of the Brexit vote.

Going forward the implications are ominous in that the EU itself may now face additional countries determined to leave. Time will tell, but the referendum results don't bode well for traditional establishment candidates and polices throughout the world.
Posted by Tom Rapko at 11:06 AM