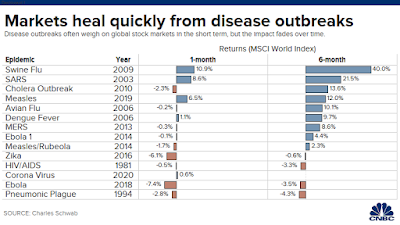 Global pandemics, real or perceived, have a nasty habit of rattling investors out of solid, long-term investment strategies; historically, however, within a six-month period, the stock market usually recovers ALL of its initial losses PLUS tacks on additional GAINS.

The trillion-dollar question though, is whether "this time" things will be different. Do we have the global health infrastructure and political will as well as decisiveness of fiscal leaders (I'm talking to you Federal Reserve) to mitigate the Coronavirus? I believe we do.

Although China has been criticized for acting too slowly, when they finally did act to contain the coronavirus, the Chinese didn't fool around; they went into full lockdown with a population zone size in the hundreds of millions. Of course several thousand or perhaps even hundreds of thousands of infected individuals had already left the country, which leads us to the current situation of initially small pockets of infection popping up all over the world. As we have become an increasingly interconnected world, literally within weeks travelers from almost anywhere in the world can go anywhere in the world. What used to take years now happens in weeks.

Now we're playing a global game of "whack-a-mole" while simultaneously trying to develop a vaccine. There are several advantages we currently enjoy over the virus, mainly due to panic and luck; reporting of new cases is broadcast over social media almost instantaneously, we "kinda" have a plan in place in nearly every pocket of the world to isolate and contain, and thankfully the fatality rate seems lower than comparable respiratory infections. That's the good news.

The bad news? The three weeks of lag time in shutting down the Chinese flight from Wuhan probably increased by one or perhaps even two orders of magnitude the GLOBAL impact of the spread. Also, keep in mind, China itself has largely slowed economically...many, many manufacturing operations have ceased. Consumption inside China, save for food, beverages, and the internet have largely collapsed. In terms of a baseball analogy, China is probably in the 5th or 6th inning in terms of containment/eradication while the rest of the world might be in the 3rd inning. A lot is going to depend on how many other clusters of coronavirus pop up, how those are contained, and also whether a vaccine can be developed in a safe and timely manner. A big wild card is whether the virus mutates.

For an interesting, and quite scary, historical perspective the Spanish Flu ranks probably second only to the Plague in terms of total human deaths. It ravished almost all of the known world over a period of several years (1918-1920). It literally went to almost every single patch of Earth where humans lived, particularly devastating remote island communities once it arrived there. It changed the fabric of human civilization in the 20th Century. Yet there were a handful of places it never arrived simply from the absolute remoteness of the places. Check out the hyperlink above to learn more...it is a fascinating story of viral infection, spread, and ultimate containment.

What's the average investor to do? Don't get rattled out of your long-term plan. If history is any indicator, there might even be some excellent buying opportunities in the weeks ahead!