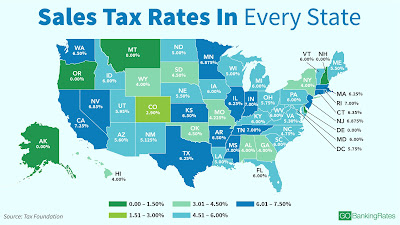 The United States of Taxation has become a reality. One of the last engines of growth that launched massive, nearly incomprehensible global trade prosperity and solidified America's internet commerce strength was struck down in South Dakota v. Wayfair, Inc. on 21 June 2018. It was a horrible decision from our U.S. Supreme Court that once again stole liberties from American Citizens. Its lasting effects and reverberations will be felt for decades if not generations to come. When we discuss "days of infamy" in history, 21 June 2018 is one of them.

Closing the last meaningful sales tax loophole cemented the United States into a solid slab of taxation, increasingly WITHOUT representation. President Reagan nailed it when he said "No government ever voluntarily reduces itself in size. Government programs, once launched, never disappear. Actually, a government bureau is the nearest thing to eternal life we'll ever see on this earth!"

Taxation is the ultimate government program. President Trump has reset many of the corporate and personal income tax rates, but the future is clearly on the horizon of what political candidates WANT to impose. Take a look at the following chart of proposed rates. These rates would essentially cut the legs off of wage-earning Americans (basically 99% of the population.) The Top 1% can easily move assets around to draw income at will or delay income or take no income and instead borrow thereby writing off the cost of income itself. 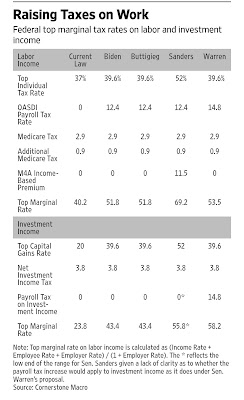 Taxation is ultimately a filter which transfers income and wealth from hard work into Government coffers. From these overflowing coffers the Government then finds a way to spend the funds. Please notice that I wrote "finds a way to spend." Not NEEDS TO SPEND. Budgets increase like clockwork because Government agencies know that if they don't spend all the money they were allocated, nigh MORE than allocated, then their next fiscal budget will be less. It is a fundamental breakdown in integrity and the Republic when this happens. And it is happening 24/7/365.

What can you do as part of the R.I.S.E. Movement? As a USA Citizen? Well theoretically you can vote. That's the "long game" if you can build a consensus that is also fiscally responsible with taxpayers' money. About 50% of the population already doesn't agree with this approach. Even though almost 100% of people are fiscally responsible in terms of their own money. (There are hundreds of "Progressive" Liberal billionaires; Bezos, Gates, Buffett, Soros, etc.) With significant social and political ramifications playing the "long game" it is a tough, tough way to win in the short term. And sadly the short term ultimately becomes the "long game."

There are only a handful of pro-growth, libertarian-leaning, fiscally responsible States remaining. In fact, the country is becoming increasingly economically polarized as mass migration from some States to others is occurring. Many people CAN'T move from State to State for various reasons (they're anchored because of a job, family, health, etc.) Others simply WILL NEVER move because they too are anchored; the benefits are just too good...the American Dream is alive and well for many, many millions of people.

But for the "coalition of the willing," there are opportunities to be had in several remaining States. Below is a map of the various opportunities to be found in these remaining States, assuming a citizen has the means, ability, and desire to take advantage of "voting with your feet." It is a biter pill for many whose relatives or friends or business helped build one State to then move to another based solely on economic reasons...a lot of absolutely beautiful coastline has been locked up by political sabotage. 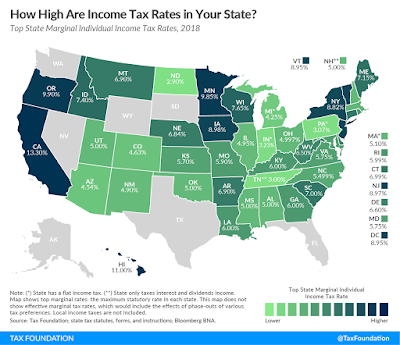 My final commentary is on regulation creep. This is the mortar that binds and seals the fate of many millions of Americans. Via no vote, or in many cases even zero feedback from voters, additional departments, regulations, codes, and enforcers are hired to build the hive of government. Be wary of this fellow citizens, these agencies come at the cost of YOUR freedom. Another famous Reagan euphemism comes to mind: The nine scariest words in the English language..."We're from the government and we're here to help."

Vote, hold your elected officials personally responsible, speak truth to power, champion liberty, and be willing to "vote with your feet" if necessary! America was built as government for the people, by the people. Not the other way around!