Where is Jack Ma?

Where is Jack Ma? 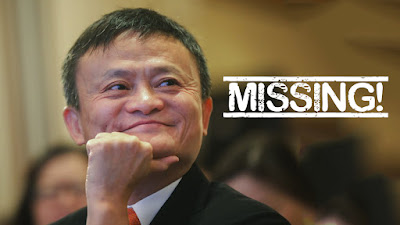 Is Jack Ma still alive? After voicing criticism over China's financial sector, the wildly successful billionaire hasn't been seen in public for over 2 months now. Some wonder whether he is still alive. Many wonder what Chairman Xi has done with this man...Jack Ma has "gone missing."
As China projects its hegemony across the globe, it has become quite apparent that speaking against "the State" is grounds for termination. And if they can do this to a billionaire, well imagine what's really going on behind the scenes. Fang Fang was recalled after her cover as a handler was blown. Hundreds of "grad students" with access to cutting edge research at our top universities simply board a plane and are never heard from again.
An interesting corollary to Jack Ma's disappearance is the disappearance of Chinese stocks on U.S. stock exchanges. The Trump Administration's final days are being spent shoring up American exchanges from Chinese corporations with questionable financial ties, money laundering, and corruption. Parts of the FBI still seem to care...other parts seemed completely compromised. The "President-Elect" has financial ties to China that are troubling to say the least. Condon's "The Manchurian Candidate" quickly comes to mind.
Almost any global tech exec will give you an earful of the trade stipulations China has put on the sector; namely originators, inventors, and makers of technology are required (yes you read that correctly) to provide their Chinese "partners" with the necessary IP to industrialize China. The rust belt is testament to what happens on a large scale when this is employed; machines go first, then their operators aren't far behind. Silicon Valley should wake up to this reality, but I fear the greed is blinding right now.
What would it take for an American billionaire to be "disappeared?" That is an interesting question. It happened to Carlos Ghosn when he landed in Japan. It seem reasonable that the average billionaire might be "disappeared" off a yacht in the Med at any given time. Civil rights seem to disappear when you leave the United States and step foot on foreign land. Even in the United States now, billionaires are hedging their bets by championing the policies of the ruling elite. I guess you can never be too careful.
Why has Jack Ma "gone missing?" Linked is Jack Ma's Bund Finance Summit Speech, it may have cost him his life. Freedom is never free my friends.