The Big Tech Five, aka Alphabet, Apple, Facebook, Amazon, and Microsoft, are monopolies in their respective businesses, yet have survived with tacit approval from the USA Government literally for decades without the hint of Sherman Antitrust Act enforcement. Why?
The Big Tech Five provide an increasingly disturbing symbiotic relationship with the government; we have reached the point where government really CAN'T break-up, much less shutdown, the Big Tech Five. Much of the existing intelligence structure is based on monitoring the social platforms, smartphones, email, purchase patterns, and contacts in the vast ecosystem the Big Tech Five provides to the government...either willingly or under the guise of plausible deniability. Just ask Edward Snowden.
The financial results of the Big Tech Five over the last decade have been truly staggering. They act as a massive collective vacuum sucking up TRILLIONS in revenue and have built competitive moats that are insurmountable to competition. You can't swing a dead cat in Silicon Valley or Seattle without hitting a billionaire. Consider, the Big Tech Five generated some $1.25T in revenue and pulled in over $250B in profits over the past year alone. 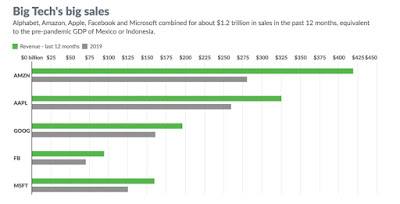 In terms of market capitalization, the Big Tech Five account for nearly 25% of the total value of the S&P 500. Apple or Microsoft (take your pick) are worth more than the ENTIRE Russell 2000 (you're thinking correctly, 1 company is worth more than 2000!)
The Law of Large Numbers would lead us to believe that the Big Tech Five may have peaked in terms of market share, capitalization, or influence...but that would deny the reality of what is happening. The Big Tech Five have branched out of their monopoly niches and spread their tentacles into other areas; finance, healthcare, and logistics for example. But one area where they ALL have spread their influence is politics.
The Big Tech Five have become kingmakers. They have the ability to sway public opinion by defining what is appropriate speech, actions, and results. This is what the colonists in America rebelled against, because by definition tyranny is political action without representation by the people. In large part the United States has become what President Eisenhower warned against on January 17th, 1961 in his Farewell Address to the Nation, a poignant part is below:

The military-industrial complex is real, vibrant, and for many, beautiful. To the average American, however, it should be repugnant. Senator Josh Hawley has recently released a crushing expose of the influence of big tech in America, aptly titled "The Tyranny of Big Tech." I highly encourage readers of this blog to pick up a copy. Consider the points he makes, regardless of political party, and how the freedoms we enjoy will become increasingly in short supply without a government run by the people, for the people. The word Orwellian comes to mind when current leaders propose a "Truth Commission" monitored by the monopolies.
Surprisingly (or not), for investors in the Big Tech Five I think there is a silver (or perhaps even gold) lining in owning monopolies that end up getting broken up. Consider what happened to AT&T in the early 1980s. Or big tobacco. Or Standard Oil. In almost every case where the Sherman Antitrust Act was applied, regardless of industry, the net benefits to the American consumer were vast...and the respective shareholders also did really, really well too.
So as financial farmers I think it makes sense to own monopolies with the theory that: 1) As a shareholder you will reap the benefits (profits, market share, dividends, etc.) of the unfair competition they currently wield, 2) You can actively VOTE your shares supporting a break-up, 3) Ultimately profit from a break-up in the coming years if political will changes as a result of the people demanding accountability.
Owning the monopolies is one of those trades where you can be paid and profit from morally offensive business models, yet vote your conscience via share ownership, and ultimately if the monopolies DO break-up then there is the potential to reap both financial and moral victories from that scenario. Win-Win-Win works for everyone, even the billionaires should realize competition ultimately benefits them in the long run. There is an old Machiavellian adage that is very apropos: "Keep your friends close, and your enemies closer."