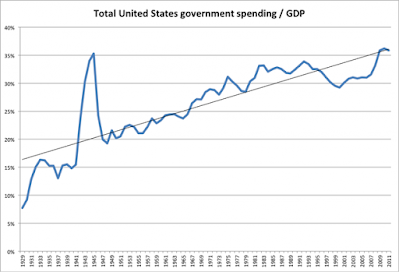 The Founders were genius. They knew if government is inherently corrupt, it must be kept small. Prior to the 20th Century, except for the Civil War period, running the government never exceeded 3% of GDP. Think about that. Today we're at 44%. The long march toward socialism is almost complete.
Why is socialism bad? The premise of socialism is the belief that all rights and property belong to the government, who gives them to you. That is in stark contrast to the concepts of freewill, liberty, and the Constitution of the United States. America was built on the belief that our inalienable rights are from God; socialism believes that there is no higher power than the government.
For almost 150 years this country was able to survive on excise taxes, or tariffs, on foreign goods coming into this country. America's resources are so vast as to make this country completely and utterly self-sufficient. The American market is such that foreign products fight to gain market share in the United States. Somehow over the last century, mainly due to wars, we have abandoned this approach and instead decided to tax citizens directly, thus slowly eroding their liberty.
Where there is increasing taxation, there is decreasing liberty. Money concentrates power, and there is no greater concentration of power than Washington, D.C. Complexity is also a barrier to liberty, as it requires time and capital to comply with ever-increasing demands from the enforcement arm of the government, the IRS.
Only two Presidents in recently memory fully grasped the fundamental basis of supply side economics, best illustrated by the eponymous Laffer Curve; that a wealth transfer (taxation) ultimately lowers total income because it provides a disincentive to work both at the top (those being taxed) and the bottom (those receiving the transfer.)  Hence, Presidents Kennedy and Reagan implemented taxation according the principles of the Laffer Curve; both saw economic booms (1961-1968, 1982-1990.) 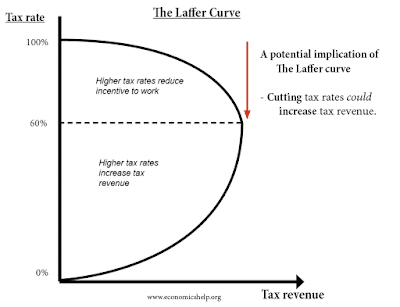 Sadly, Joe Biden doesn't understand the economic policy of JFK. Kennedy understood, most likely from his father's influence who was a very successful businessman, that a rising tide lifts all boats; both high income earners and low income earners benefit when they keep more of their own money and decide how best to allocate it.
Laundering money through the government for social programs doesn't work because the government is too corrupt; there are too many lobbyists, politicians, and special interest groups wanting their "taste" before policy is created to actually implement a program. Once established, a government agency is as Reagan well put "as close to immortality" as anything on Earth. Government creep continues into every facet of life. Liberty decreases. Personal responsibility is eliminated. Kinda the opposite of the American experience. We can go to Europe for that anytime.
The criticism to low taxation (read high freedom) is that almost inevitably there will be outsize winners. Some individuals or companies or both acting as the same will monopolize industries. This is a natural result of capitalism. It actually shows that capitalism is working. The downside of monopolies obviously is that upon reaching monopoly status they provide stagnant utility to the economy because there is no competition which leads to a collapse in innovation, productivity, and ultimately economic stagflation. This is why the Sherman Anti-Trust Act must be enforced.
Part of the rise in socialism in the United States is directly tied to the rise of monopolies; they constrict liberty by steamrolling competition at the behest of the government. It is long past due that many of the largest tech companies receive immediate scrutiny and enforcement. Or if that is unpalatable to our elected "representatives," then smaller companies are provided with significantly better rates of taxation, incorporation benefits, and work stimulus. Regulation favors the powerful. Naturally, less red tape helps smaller entities survive and thrive.
As financial farmers loving liberty and freewill, what are we to do? Trump had it right by reforming the tax code and saddling foreign competition with tariffs. Picking winners and losers isn't always popular, but picking America First should be popular...and it is a lot more palatable as the Founders well knew to charge foreigners for the privilege of doing business in the United States rather than extracting taxes from citizens.
I fear in the current political climate the only option for Americans is to vote with their feet; move to tax-friendly (read freedom-friendly) states that respect industrious work. It may be possible to remain in states without onerous taxation, but as the race towards complete socialism continues states themselves will have to choose on what side of this conflict they stand; for the citizens and freedom or pure socialism. The winds and tides of civil discourse seems to be pitting state against state once again, and once again it is about the unalienable rights of God-given freedom, liberty, and property. Who owns you?