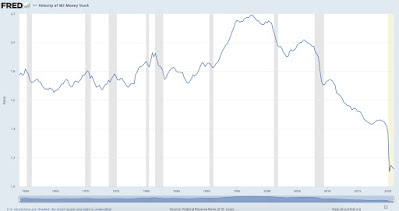 Velocity of Money is "a measure of the number of times that the average unit of currency is used to purchase goods and services within a given time period." The chart above illustrates the historical rate of money usage, with gray-highlighted areas indicating recessions. Up until the mid-1990s the velocity of money was pretty stable. Something happened in the late 1990s however that permanently slowed the usage of traditional forms of money...the internet sparked a tsunami of credit card usage.
Although in circulation for decades prior to the internet surge, credit cards had typically been a "wallet utility" in place of cash or check, not the primary form of payment. With the rise of the internet using a credit card to pay for goods became the de facto solution (readers of this blog old enough to remember eBay prior to credit cards at the dawn of e-commerce will remember sending physical checks to sellers for auction wins!)
Credit cards, however, are not included in the velocity of money because they are considered a debt instrument, hence in the late 1990s we see a precipitous falloff in the velocity of money which usually would be consistent will a massive recession (we have had those as well, most notably the internet bubble, 9/11, 2005 commodities crunch, 2007-2009 global financial crisis, and of course more recently the global pandemic 2020-2021.) One trend has remained in an upslope though; credit card issuances and credit card transactions.
Consider the fact that there are well over 2.8 BILLION credit cards in circulation globally. Although that leaves several billion people uncredit-carded, the credit card companies are working hard to close that gap.  One of the most stunning statistics, and there are many which would make an actuary gleeful, are the daily number of transactions. A Nilson Report indicated in 2018 that there were approximately 1 billion transactions PER DAY. This report is simply fascinating and worth a read.
OK, so what does all this credit card talk have to do with being a financial farmer? A lot. My theory is that we  should be looking to own velocity; put another way own the roads and tollbooths, not the cars. Or maybe more relevant to today's fascination with "cryptocurrency," own the pipes and rails that it travels over so you can make REAL money on transaction volume. Consider the potential of non-cash transactions projected in the coming years: 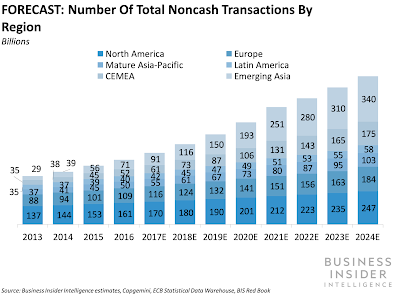 Until citizens have the opportunity to own a tax collection and enforcement agency like the IRS, the next best thing in the financial world is to own velocity. It is a bet on population. It is a bet on commerce. It is a bet on technology. The underlying currency itself isn't necessarily as important as the monopolistic positioning of the "pipes & rails" on which it travels; ie we should NOT really be concerned whether dollars or bitcoin or Swiss Francs are being swapped, but rather that we're getting a piece of every single transaction at scale.