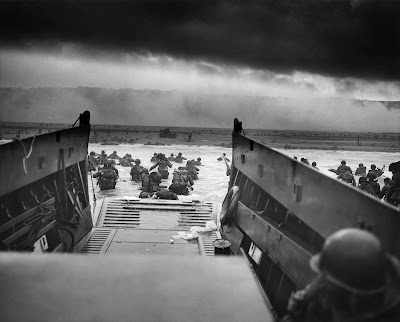 Few events have defined a generation more than D-Day. To a large part, an entire generation risked it all to save it all; democracy, freedom, and human rights. In the short term they succeeded. Along with saving the world as they knew it, the Greatest Generation also raised the Baby Boomers. In many ways the two generations couldn't be more different.
When the good times came after World War II there was an economic and social boom unprecedented in the annuals of history. The fruits of their sacrifices were harvested as America rose to global prominence in many fields; engineering, medicine, and business to name a few. But as President Eisenhower well warned us, there also rose a new enemy, the "military-industrial complex."
The MIC has metastasized over the ensuing decades to capture a wider and wider swarth of society, to the very point now that we once again see authoritarianism and socialism rising in the United States. It is extremely troubling to see the unprecedented growth of regulation, taxation, and group think in government which is dismissive or outright hostile to very American citizens elected officials allegedly represent. Canceling, muzzling, and jailing dissent has become commonplace. In many ways, the American government itself has become a criminal enterprise. On this solemn day, I ask what have we wrought from our nation's sacrifice?