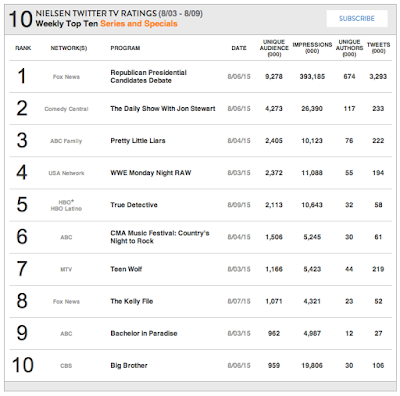 Once in a while I find a really cool website, and for those of you who like metrics, data, and generally cool marketing stats I think you'll love Nielsen Social. It is the fusion of television and Twitter which of course is a marketeer's dream; instant analytics on user reaction (and subsequent action.)

From an investing standpoint, this public information on Nielsen Social is really telling; it instantly gives you the ability to evaluate an audience size, its effects on motivating them to interact socially, and a higher degree of certainty in regards to what actions they took as a result.

Although I don't have additional data to back up this theory, I suspect there is a direct correlation to the efficiency of an advertising campaign linked to the content which generated the best buzz.

But like Don Draper said, advertising only works on some people. The people who watch…and Tweet about it.