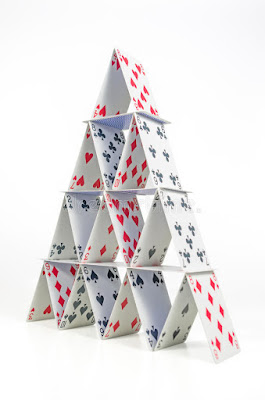 As Covid rages across the world, a house of cards has been revealed; commercial office space concentrated in costly urban areas. Changes in behaviors have resulted in massive shifts in commercial office space. Literally hundreds of billions of dollars in "value" in this sector has been destroyed. Commercial office space has experienced its own Chicxulub Impact Event.
It has taken a global pandemic of epic proportions to reveal something many office workers (especially the younger generations) have know for years; save for some special situations, workers can achieve more productivity and teamwork outside the office than in it. The office has almost always been a "round-up" corral for mid-level management to practice management techniques on their employees or bring in management consultants to do the same. Work in many office environments was a kabuki dance of office politics and fleeting attempts of productivity in-between endless meetings, training, and continuing education. But alas, Covid has demonstrated that productivity does not collapse and the right hires who have had the opportunity to embrace the corporate ethos do just fine.
What next? Changes in work behavior has significant secondary and tertiary effects. From an urban perspective, many people living in a city also work in that city. There has been a significant urban exodus into the suburbs and interestingly the exurbs. People with traditional office jobs are fleeing (or have fled) and many aren't coming back; if they can execute their job functions or run their small businesses remotely they will.
The impact of an urban exodus to local restaurants, that were already teetering on the edge, will be fatal. Same for entertainment venues. Retail shopping. The list is long. Malls in urban areas might survive, but it's hard to see how (or why.) The one lynchpin keeping the urban communities together for the most part was education, either in public or private schools. As that has become severely disrupted and other avenues of learning emerged, that may have been the last straw for many families who have the ability to leave cities and put their roots down in communities with lower student to teacher ratios, quality clinics rather than emergency rooms and leverage the ability to perform job functions via technology.
Technology has helped the United States and many developed counties weather the Covid storm; by one measure, between February and October this year savings account balances have increased by $2 trillion. So toilet paper isn't the only paper we're hoarding. There are literally tons of cash sitting on the sidelines! Yes our Federal deficit has soared by tens of trillions of dollars, but there is no doubt that as a country we have significant dry powder right now.
If the stay-at-home economy is here to stay then as a society we should embrace a strong hub-and-spoke philosophy in terms of...well...everything...work, education, medicine, farming, manufacturing, all of it. Think Amazon, but in terms of society and that's where I think we're going. The emphasis going forward should be on strengthening the spokes, while ensuring the hubs survive. We have too much office space, but not enough residential space. That solution seems pretty obvious. The answer to the excess in high-rent urban office space is pretty simple: convert stunning corporate offices in the heart of major urban areas into housing. What to do with all these mid-level managers and consultants? Hub-and-spoke farms seem like a great solution. Farming is an honorable profession and keeps this country alive. Viva the farm!