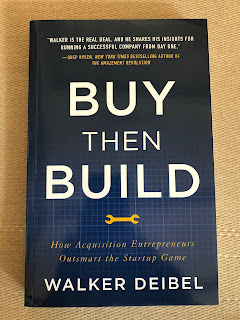 Occasionally a book is so profoundly simple in its premise a reader is taken aback as to why he hasn't thought of this idea before; such is the case with Walker Deibel's "Buy Then Build"
Many of my friends and clients are always on the prowl for a side hustle or a retirement job and usually the path has been the well-trodden and well-marketed push toward converting either a hobby into a business or...gulp...starting a business from scratch. Theoretically either of this two methods can and do work, but for every Uber, Airbnb, or Slack there are literally tens of thousands of expensive failures. Put another way, there is only one Ferrari in California with the license plate "EPICWIN"
Not to beleaguer the point, but for those readers who haven't had the pleasure of a very public start-up failure, it is unpleasant from many aspects; typically you lose (lots of) money, (lots of) time, and even friends or colleagues. So with that in mind, Walker Deibel's approach makes perfect sense.
They say a picture is worth a thousand words, and the major takeaway is clear as day on page 32: 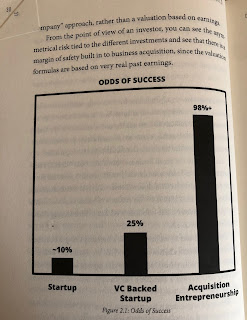 Feel free to zoom in on that image. Deibel illustrates the "Odds of Success" comparing a startup, VC-backed startup, and the acquisition of a going concern. This is the proverbial money shot of why those interested in either starting a new career or adding a business to their existing schedule should strongly consider buying an existing business and building on it from there. Your odds of success increase exponentially when you buy an existing business and build it out.
Using Buy Then Build as a roadmap and having a handle on your time commitments as well as a potential budget, two resources I have found to be extremely helpful include: BizBuySell and Flippa. Perusing all the listings on both sites is really intriguing as to what is out there and also the different methods and techniques business owners have built their companies over the years.
Hopefully this post acts as an entrepreneurial lightning rod and helps those readers interested in running a business or side hustle or both the value of approaching the startup cycle from the position of an acquisition then building on the existing customer base, infrastructure, and cash flow.