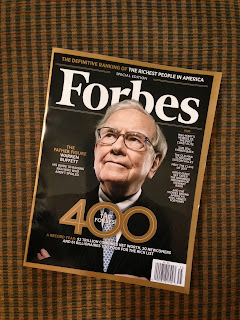 What differentiates you and I from the Forbes 400 list of the most wealthy Americans? Probably several, in fact, MANY millions of dollars. Indeed, the "cut-off" this year to make the list was nearly 1,600 million dollars!  That's right, the short-hand version of $1.6B.

From a percentage perspective, the vast majority were "self-made"; from a net worth perspective (that is, the relative average of their net worths) a large number of the members inherited their wealth.

Without taking away the accomplishments of the "self-made," let's briefly put that in perspective; "self-made" to the average American implies relatively little starting capital and few life advantages (i.e. having a powerful political figure for a father, or inherent back-up seed money, or simply what the Chinese refer to as guanxi) probably disqualifies many of the Forbes 400 immediately from flashing the "self-made" business card.

In fact, of the Top Ten, only Larry Ellison fits the "self-made" profile to a tee. So be a little wary of the term "self-made," that moniker can be deceptive when there are inherent advantages to starting life with the right guanxi. With that said, though, let's take a close look at what has sustained  the presence of the Forbes 400 members and also what it took to get there. I have dubbed these "The 3 Traits of The Forbes 400"

First, there is a consistency of purpose present. A member of this elite group has either held, or whomever they inherited their wealth from, a lasting and sustained consistency of purpose on building as what Walter White termed "an empire." Go through the list and next to the accompanying person you'll see a very distinct desire to be the best at whatever field they were in; from candy to software to automobiles. Rarely do you see a member that founded a conglomerate; they focused on a niche and grew rich.

Second, to a man (or woman) they are ruthless in pursuit of excellence; whether in the form of advantage, branding, market share, taste, material, logistics, etc. Virtually every aspect associated with their company is pursued with a ruthless passion. They are driven to be the best; extreme personalities are commonplace, as is eccentricity in thought and speech. Fitting the norm is not prized, or even pursued for that matter.

Finally, they all benefited from being prepared for luck; good or bad luck, multiple calculations and scenarios seemed to be in place which often resulted in a significant paradigm shift that benefited their net worth (a hostile takeover, sale of a division, an IPO, a funding event, etc.) Imagine a field general that has a written plan, but in reality has fifty mental plans at his disposal, and that is your Forbes 400 member. If not master strategist themselves, they have paid the expense of hiring the best tacticians.

Consistency of purpose, ruthless pursuit of excellence, and being prepared for luck. Those elements sound just like the goals of someone planning to Invest Like A Farmer!