Batten Down the Hatches! 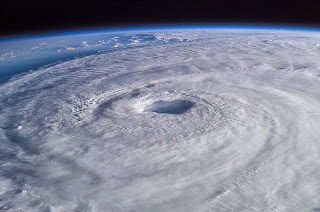 One of my favorite Wall Street books is The Greatest Trade Ever which chronicles a group of traders who had the foresight, capital, and luck to both predict the fall of the mortgage market and trade on it. They all bet against the sustainability of the mortgage security market in one form or another (mainly through derivative contracts); they were all successful because despite the proverbial writing on the wall, no one else was betting that this could ever happen. I think we're in a similar situation right now.

As financial farmers we want to Invest Like A Farmer for some very practical reasons, a really good one is not to go broke. This is what is referred to as the risk of ruin. There is one goal that is paramount to every farmer; avoid ruin. This simple goal, frequently overlooked or ignored, bears repeating: Avoid Ruin.

Young or old, we all have different tolerances to risk. We should pay particular attention, however, to the risk of ruin. Broadly defined, the risk of ruin is the point of no return, that place or situation you've reached where your finances, and in particular, your farm is bust. You can't squeeze another nickel from the fruit stand. All your other options are seemingly impossible as well. Essentially there is no way out. Amongst the farmer's many concerns, the risk of ruin must always run paramount. Losses can be sustained, opportunities missed, leverage overdone, and a host of any other problems survived, but we want to avoid ruin at all cost.

Ruin can be devastating and possibly unrecoverable. For those who have clawed their way back from the brink it can be a valuable life lesson, but I've never heard it described in terms of nostalgic fondness. With full respect to Nietzsche, who wrote: "that what does not kill me, makes me stronger," ruin is painful, and regardless of your age or circumstances, the true financial farmer wants to avoid the risk of ruin. It is far too celebrated amongst the entrepreneurial elite who have never tasted true ruin; they had and have back-up plans and resources that are never revealed. Keep your farm well-tilled, planted, and enjoy every harvest even if it is at first meager. Your goal should be a lifetime of sustained financial farming, a lifetime.

A lifetime of farming is sustained by not being overextended even when everyone claims we (the USA) could never default. October 17th is fast approaching, but that date doesn't necessarily scare me. What I'm concerned about is the process that led up to this point, and in particular November 1st. The tax revenues are in place for continued short term operation, but beginning on the 1st we have significant outlays; I truly wonder as a country if we're ready to have a hard conversation of what we fund and what we don't. Do we pay the debt obligations, do we pay Social Security, Medicare, the military?

I maintain the prediction of a 50/50 chance of default; at this point every financial farmer should have cash on hand as well as either a fully or partially hedged portfolio in the event of October 17th passing without a deal. In the event of a deal getting passed, I suspect it would be a short term extension at best and ultimately we'd still be left with the same systemic problems in the federal budget. The "good" news, regardless of whether a deal is cut or not, I don't see any possible chance of the Federal Reserve tightening monetary policy; not at the next meeting, the one after, or even well into 2014. The economic recovery is still too nascent and obviously there are far bigger political problems that need to be solved. The two charts below help illustrate the challenge this country faces ahead; how do we bridge the spending and revenue gap while sustaining our yearly outlays? 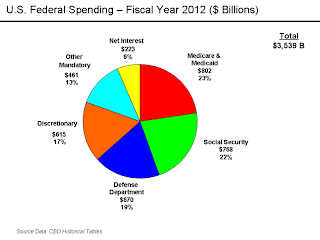