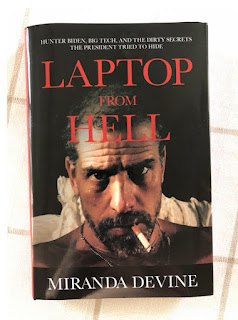 Imagine you're an arch-criminal and you document every crime via photos, texts, and e-mails. Then you transfer that electronic record to your laptop, which you decide to leave at a computer repair shop and then never pick up. Well financial famers, that is the basis of Miranda Devine's superb, can't-put-it-down, dog-eared book "Laptop From Hell."
When did corruption become the standard of the Biden Administration? Well before Joe & Jill Biden took office. If we are to lend credibility to Hunter's laptop reveals, and we 100% should because everything in the book is cited, then it appears that the corruption began during Joe's first term as a Senator.
Without rehashing, and spoiling, the "origin story" of the Senator, Joe parlayed this position into one of Clintonesque peddling and power-brokering over the next 40 years. It ran the gamut of securing attendance at Yale Law School to overpaid plum positions to outright "quid pro quo" for influence.
Regardless of party affiliation, nobody wants this in our country. It makes the United States a laughing stock and on par with banana republics we so frequently chastise for corruption. When in fact it is OUR leaders with the tacit approval of legions of government minions looking the other way that facilitates the complete loss of confidence in the Republic. A groundswell of nausea has arisen across the country.
We need sweeping political changes. Establishing term limits, locking the public-private turnstile, and dissolving "non-profit" foundations are at the top of the list. As Americans we deserve better than this, the corruption needs to stop and those "public servants" need to be held accountable up and down the chain of command.
Oddly, the "Laptop From Hell" might just be the deliverance this country needs. In many ways Hunter's photos, texts, and e-mails seem to be a cry for help from the proverbial bagman to anyone with some backbone to help right the wrongs done by political corruption in this country. Indeed, I think Joe Biden said it best:
"Corruption is a cancer, a cancer that eats away at a citizen's faith in democracy...It saps the collective strength and resolve of a nation. Corruption is just another form of tyranny." - Joe Biden, Kiev, Ukraine, 2014