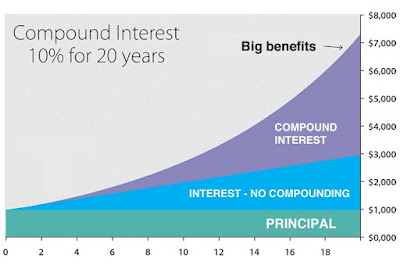 Vast amounts of money are often made by doing nothing. In fact, almost the entire economy is based on the principle of holding power while assets compound. The mechanism of compounding fuels asset growth by the function of incrementally adding more and more underlying wealth which germinates even further growth, ad infinitum. Simply put, compound interest is "interest on interest."
Financial farmers need to have holding power. You can own the best assets and have plenty of investable cash, but without holding power it is extremely difficult to get ahead because you are constantly fighting against the tides of doubt, anxiety, and speculation. These erode your ability to hold. Holding power provides the best opportunity to harness the magic of compounding.
There are also so fringe benefits to holding power. Typically the tax burdens are LESS, as patience is rewarded by the IRS. Your overhead in terms of logistics also tends to be lower as you have more capital in fewer positions and you can focus on those limited options rather than a spectrum of possible answers.
Ben Franklin put it well when he said about marriage "keep your eyes wide open before and half open afterwards." That statement can aptly be used in the stock market, real estate market, and commodity market as well. Will some crops (investments) fail? Yes. But having the holding power on others that systematically compound makes it all worthwhile, and then some.