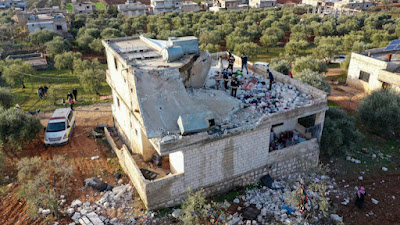 At what point did the United States decide to stop following the Geneva Conventions? It seems like right around the time of the Afghanistan debacle the Joe Biden Administration no longer wanted to establish, follow, or track any sort of Rules of Engagement.
Last night a protracted firefight led to an explosion that waxed a reported dozen civilians (yet again)...but this time we allegedly also got an ISIS leader. So much for the "silent operators," I guess those guys are all working on their books, movies, and fitness programs since being discharged for not getting the vax.
But this brings up a larger question: When our own society is off the rails (see Southern Border or Urban Crime Rate or Inflation), why in the world is the United States doing proactive military ops in Syria on terrorists heavily shielded by civilians? This felt like yet another sad display of public relations in projecting a "tough guy" image that any meaningful action. This reckless attitude is having significant spillover effects.
If you think the Rule of Law is eroding faster than a California beach house's front yard you're right. Societal breakdown at scale is occurring before our eyes. The metrics don't lie, and even a lawn sign espousing that you "believe in science" won't help mitigate the effects of brazen violations of the law. Before we go gallivanting around the globe flexing our military muscle, this country needs to get its own House (yes the Capitol version) in order.
When freedoms are trampled and the Rule of Law becomes a joke, then hypocrisy rules. I predict an implosion, and right soon. The country's media is briskly changing the narrative to "living with Covid," lockdowns are now only for the "unhinged," and even mask mandates are being dropped. CNN cleaned house yesterday. And as the capitalist Bob Dylan so rightly remarked "the times, they are a changing."
Financial farmers should take careful note of the sea change occurring in front of them; as Covid fades another hydra will raise its head before the all-important November Election cycle. It could be Ukraine. It could be Urban Crime. It could be inflation. It could be all three and more. Stay on point and seek out quality assets at good prices. Protect your family from the erosion of freedom. Champion the Rule of Law. Be vocal about hypocrisy. This is YOUR country and politicians work for YOU. Make it so.