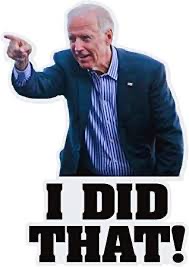 Citizens must always be vigilant against their governments, because tyranny never sleeps. Consider legislation tucked into the "American Rescue Plan Act of 2021" which will generate a 1099-K on a cumulative total of $600 in annual transactions....that's right $600. Over a year.
The IRS (and whatever political party that controls them) will now be collecting ALL transactions done with a credit or debit card or such peer-to-peer services such as Venmo or PayPal. Readers of this blog should be concerned, very concerned.
As the Wall Street Journal reports, "...millions of taxpayers who have never seen a Form 1099-K will be receiving them. While no one knows how many Americans will be getting these forms, tax lobbyists estimate the number at as high as 20 million."
20 million? Ha! Assume nearly EVERY Venmo, PayPal, eBay, Etsy, Facebook, and Amazon seller will be getting a 1099-K. This essentially provides the Government with complete financial surveillance on every American, destroys the fundamental rights of privacy, and moves us closer to a 1984 scenario. We're getting to the point where citizens can't even THINK too loudly.
How did this happen? Thank your "representative" in Congress and the former Senior Senator from Delaware. Joe Biden most assuredly did this. But the true betrayal began as this blog has long lamented even earlier, by John Roberts acquiescence to the Wayfair Decision.
In a landmark 5-4 decision, the Supreme Court ruled that essentially all internet transactions were taxable. This author believes that this decision is the most consequential judicial ruling in a generation, yet it has been quietly (except for the regulators) swept under the rug. Make no mistake, innovation, commerce, nigh the entire American way of life was impacted.
It is hard to believe prior to 1913 there was no income tax. Ironically, for some 57% of Americans in 2021 there STILL was no income tax! Substantial tax reform is almost impossible given that the majority of Americans pay no income tax, while the "meat & potatoes" of society (ie the dying Middle Class) pays nearly all of it.
As financial farmers this blog typically suggests voting for change. But that is a joke. The lobbyists control Washington, your local Congressman(en) is bought & paid for, and even if you do vote, what is the purpose? The non-payers far outnumber the payers.
With the passage of the freedom-torching "American Rescue Plan Act of 2021" financial farmers need to go back to the old ways of doing business.  Yes I'm talking cash.