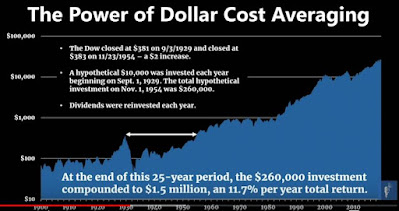 Imagine investing for a lifetime. Not for a moment, not just early in your career, but rather for a lifetime. Consistent, disciplined buys made over decades. Many long-term investors like the curmudgeon Warren Buffett swear by it. But why?
The stock market will generally go up over time. In fact, something like 53% time on a daily basis the Dow Jones Industrial Average ends the day in the green. Granted, that's only slightly better than a coin flip, but that small spread adds up significantly over time. Wall Street is pretty much the opposite of a casino actually; the longer, more regularly you invest in the stock market the higher percentage chance you have of winning.
Dollar Cost Averaging (DCA) is an investment strategy wherein an investor buys stocks, or an index even, on a regular basis with the same dollar amount over an extended period of time, ideally forever.  This results in purchasing more shares of an index for example when the price is LOW and fewer shares when the price is HIGH.
In a listless Bear Market with violent swings in daily prices with no discernible end in sight, this strategy makes plenty of sense. When no man, or even computer, can call a bottom buying in fixed intervals offers an investor the ability to circle around a low with higher conviction rather than investing a massive lump sum at a singular point. Think of it this way: Would you rather have 50 small darts to hit the bullseye of a moving target or one big dart?
The greatest risk of the DCA strategy is when investors abandon it, either by cashing out or no longer making periodic investments. Once that occurs they are fully at the whim of the market's volatility, which as we have painfully learned again this year can whipsaw violently, leaving investors who were punch drunk only months ago on the euphoria of a winning cycle easily down double digits in a short, brutal period of time.
Posted by Tom Rapko at 8:45 AM