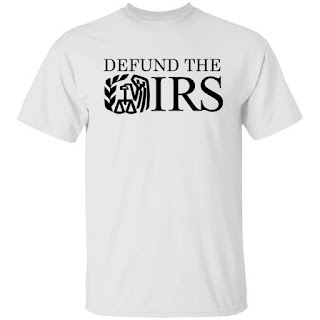 On this most hallowed day of Civic Duty, did you get a call at the crack of dawn from your Congressman profusely thanking you for paying your "fair share?" No? Hmmm. I'm getting the distinct feeling that we (taxpayers) are getting the taxation without the representation. This brings me to a serious and singular question for you my dear readers: Would you pay income taxes if there was no threat to your personal liberty?
Reimagine a Republic where income taxes are voluntary. Citizens pay of their own accord, with no threat to personal liberty. What would happen? First, from an administrative standpoint the IRS would largely cease to exist. How much does is cost to actually run the IRS? As usual, nobody really knows. Estimates are in the $10-20B range or 35 cents per $100 collected. But that seems woefully low. I doubt the IRS is more efficient than PayPal's piggish 3% vig on every transition. Regardless, the vast majority of this cost goes away without enforcement.
A cursory knowledge of the Laffer Curve (which differs significantly from the current Gaffer Curve) reveals that productivity will explode with less taxation. Keep in mind, a large volume of Americans will still pay income taxes. Probably on the order of at least 40% based on their personal desire to support true civic utility, ie the proverbial collective defense, infrastructure, and benefits that this country has established. But the net effect of voluntary taxation will be the honing of budgets, collapse in corruption, and laser accountability of public funds because "representatives" will now be truly beholden to citizens, rather than corporations.
"It's dangerous to be an honest man," quips Michael Corleone in Godfather III. When there is rampant corruption and no trust, personal liberty needs to be threatened to pay taxes, otherwise no rational person would pay taxes. Representatives, do your duty to your true constituents or resign.
Let's reimagine this Civic Duty as one that aligns with our highest ideals as a nation. Participation is voluntary. Personal liberty is no longer threatened. Civic Duty becomes one of pride, not fear or indignation, and check images proudly sent to the IRS circulate like viral Twitter cat videos.