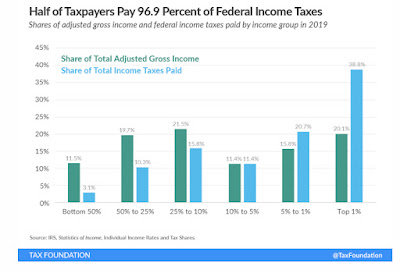 To the half of all eligible taxpayers who pay for it all, I salute you! Sadly, not one of you will even get a cursory phone call from your elected "representative" on this hallowed day...regardless of how much of your income earned with blood, sweat, and tears is sent to the U.S. Treasury to be squandered by our politicians. And that fellow financial farmers is a true travesty...taxation without representation!
In a Republic everyone should have skin in the game, and today we have serious leakage at both the top and bottom...corporations are skirting income taxes by nefarious means protected by the politicians true constituents (corporations) and at the bottom it is is a free-for-all (literally and figuratively) as this country no longer has borders. The net result of both of these scenarios is the value of citizenship is diluted.
Diluted citizenship ultimately breaks the back of a Republic because it cannot function anymore without a rule of law. Oscar Wilde once quipped that taxation is the price of a civilized society. And he was right. But taxation cannot be increasingly borne by the middle class. The truly wealthy have achieved escape velocity. They have the ability to regulate income flow, or even employ the classic "Buy, Borrow, Die" strategy of owning assets, borrowing from them, and then when they die passing those assets to heirs who can then employ the same strategy. Effectively it is possible for multiple generations to not only to never pay income taxes, but to also pass those very assets to their heirs for generations to come.
For those wanting a better life and coming to America the pastures seem green indeed. Simply walk across the southern border into Texas and not only will you get a free iPhone and airfare to a destination of your choice, but more importantly, access to a myriad of services. But all is not what it seems. The America of today without laws, borders, or political leadership is simply replenishing the working class poor for the next generation of serfdom. Just like citizenship, "free" dilutes the value of goods and services to nothing. Free schools. Free housing. Free healthcare. Look at what "free" buys and it looks a lot like horse manure.
We know HOW this is happening. But WHY? Click the chart below and it should reveal some interesting statistics:

As of 2022, approximately 150,000,000 taxpayers filed returns. The United States has a population of about 330,000,000. So 45% of the total population filed a return. Of that 45%, only about 50% paid any taxes at all. So 50% of 45% comes to about 75M people. That essentially is the sum total of the remaining Middle Class. It effectively keeps the entire country running. Dear readers, let's call it what it is.  These 75M people pay "protection money" not to be ensnared in legal troubles, lose their passports, or go to jail. Who would actually pay taxes voluntarily without threats to their personal liberty? Civic duty my a$$.
Yet when we look for holes in the system, corporate taxation is oddly missing at levels commensurate with their respective profitability. And that's the rub. Big corporate earners now valued in the hundreds of billions of dollars and a handful in the trillions are largely avoiding taxation.
Corporate scofflaws own the elected representatives in this country. How else could they pay only $360B in taxes (as estimated by the CBO in 2021), yet have a collective valuation of approximately $53T? A simple "back of the envelop" measurement indicates that some 99.4% of their valuation is retained on corporate balance sheets rather than in the US Treasury every year. Put another way, literally TRILLIONS are missing from the Republic's coffers.
What's good for the goose should be good for the gander. The problem is the 16th Amendment permanently handicapped the human citizen, and empowered the corporation. Representatives listen and act for those who pay them. Today that is largely the corporation. Granted they get a "little" pocket cash in terms of salary and pension and healthcare from citizens, but the corporations keep them in power. The gravy train will continue until there is a significant legal schism that once again empowers people over corporations.