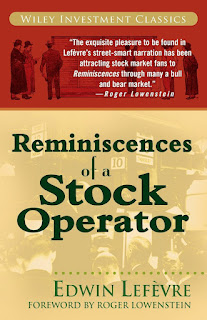 Edwin Lefevre chronicles the life of legendary stock trader Jesse Livermore in the masterpiece "Reminiscences of a Stock Operator." It is a timeless read for Wall Street aficionados, students of the stock market, and even those with just a cursory interest in finance. If you haven't read it yet, put this book on the top of your summer reading list. Below are some of my favorite tasty tidbits. The wisdom and knowledge gleaned from this book are priceless, but Amazon will sell you a copy for about ten bucks!
1) "It takes a man a long time to learn all the lessons of all his mistakes. They say there are two sides to everything. But there is only one side to the stock market, and it is not the bull side or the bear side, but the right side. It took me longer to get that general principle fixed firmly in my mind than it did most of the more technical phases of the game of stock speculation."
2) "After spending many years on Wall Street and after making and losing millions of dollars I want to tell you this: It never was my thinking that made the big money for me. It always was my sitting. Got that? My sitting tight! It is no trick at all to be right on the market. You always find lots of early bulls in bull markets and early bears in bear markets. I've known many men who where right at exactly the right time, and began buying or selling stocks when prices were at the very level which should show the greatest profit. And their experience invariably matched mine--that is, they made no real money out of it. Men who can both be right and sit tight are uncommon. I found it one of the hardest things to learn. But it is only after a stock operator has firmly grasped this that he can make big money. It is literally true that millions come easier to a trader after he knows how to trade than hundreds did in the days of his ignorance."
3) "Another lesson I learned early is that there is nothing new in Wall Street. There can't be because speculation is as old as the hills. Whatever happens in the stock market today has happened before and will happen again."
4) "There is nothing like losing all you have in the world for teaching you what not to do. And when you know what not to do in order not to lose money, you begin to learn what to do in order to win. Did you get that? You begin to learn!"
5) "Speculation in stocks will never disappear. It isn't desirable that it should. It cannot be checked by warnings as to its dangers. You cannot prevent people from guessing wrong no matter how able or how experienced they may be. Carefully laid plans will miscarry because the unexpected and even the unexpectable will happen. Disaster may come from a convulsion of nature or from the weather, from your own greed or from some man's vanity; from fear or from uncontrolled hope. But apart from what one might call his natural foes, a speculator in stocks has to contend with certain practices or abuses that are indefensible morally as well as commercially."
Many readers will notice distinct similarities in Livermore's trading philosophy utilizing momentum signals and the Absolute Alpha strategy launched on June 6th.  Absolute Alpha acted on the preponderance of Bearish market signals at launch and has steadily added more cowbell over the ensuing week, including today. Bearish signals remain constant and intact. Livermore would probably LOVE trading in our era.
Investors today have many advantages that Livermore didn't have in his day; nearly real-time quotes and execution with almost universal free trading, nearly limitless data sources, and even the ability to limit risk via index trading rather than speculation in individual stocks or commodities. So although the game may have changed, most (all?) of the behavioral characteristics remain the same; fear & hope drive the investing world.