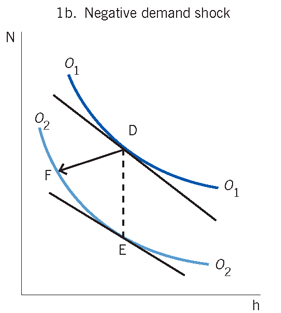 Has the supply of oil suddenly increased? Has a new pipeline from Canada been approved? Has the lease utility rate spiked? No dear reader, none of these things have happened...yet the price of oil has markedly declined in the past several weeks from $130/barrel to a "paltry" $107 today. What gives?
When inflationary prices are out of control Adam Smith's old "Supply & Demand" really comes to light. The supply of oil hasn't increased, but demand sure has experienced what is termed a negative demand shock. Consumers aren't stupid, and the number one rule of game theory is that they act in their own self interest. Hence when oil spiked, consumers began shifting their demand.
This author suspects we are in the midst of a massive negative demand shock right now. Typically in a negative demand shock prices will fall as demand shifts away from the commodity being purchased and/or the quantity purchased also falls. In California for example, many gas stations now limit the amount of gas you can purchase.
As the chart above helps to illustrate, as the demand shock takes hold output falls, employment falls, and prices eventually fall. The question arises, however, how inelastic is the demand for oil? Or in other words, how much can demand truly fall for oil? This author has long suspected it will lead the economy into a recession.
Typically the first things being cut are discretionary items, all of which are touched in some way by the price of oil. Moving along Maslow's Hierarchy of Needs pyramid, the base is made of food and shelter. Nearly everything else is expendable to secure those two fundamental blocks. People don't have to go on vacation. People don't have to drive to the office all the time now. The boat (and its slip) can be let go.
Spending will be reallocated according to priorities in life. Consumers are like water, they seek maximum utility and flow accordingly. Demand started shifting even before the Fed acted to stifle it by raising interest rates. The fear of course is combined with a demand shock, the Fed's policy will tip the economy into a recession. With oil prices already moderating, and the Fed promising to raise rates until they "break inflation," expect a hard landing that skids into a recession.
Looking for a Financial Advisor?