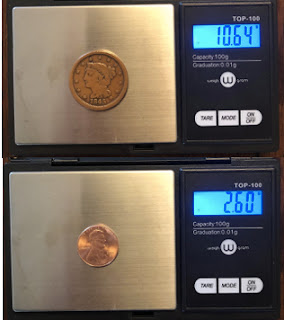 The deceptively titled "Inflation Reduction Act" is right out of Saul Alinsky's "Rules for Radicals" playbook. It is more accurately an "Inflation Production Act" than anything. How Joe Biden can claim otherwise is pure malfeasance. What's even more troubling is that ALL 50 Democrat Senators AND the Vice President went along with the lie. But isn't inflation just a "First World" entitled problem?
As the famous Janus God of investing Warren Buffett recently quipped, "Inflation swindles us all." And up until recently, high inflation was actually almost always a Third World problem. That is because there is a strong correlation between inflation and corruption. Where there is high inflation, there is almost always rampant corruption. The two are joined at the hip. Consider the lowly penny for example.
Pictured at the top of this blog post today is a penny from 1845. It is 4X as heavy, almost 2X thick, and nearly 2X as wide as the corresponding 2022 penny. Oh yes...and the 1845 version is also 100% copper. The modern penny is almost all zinc. The penny provides a nice visual example of inflation over the past 77 years.
Generally speaking, when too much money is printed not backed by physical value (think gold), then the cost for goods increases because too many people have too much money chasing too few goods. That is the textbook definition of inflation. This is how a nation robs its people of value. It increases the money supply without increasing the value behind the money. You pay more for less.
The "Inflation Reduction Act" accomplishes this at scale by spending dollars we don't have on things we don't need at a price point that is too high. Even more troubling, it acts as a government clearing house for picking winners and losers rather than embracing a free market system where citizens are the deciders on how best to allocate their own capital. And then there is the IRS issue. 87,000 new armed tax police.
If this country is going to escape from a self-inflicted recession, then we need smart economic and monetary policies. Elected representatives should embrace the principle on which this country was founded, namely a "wide horizon, free range" mentality of low regulation, few laws, just enforcement, and a focus on self-reliance; from energy independence to USA manufacturing to leading the world in engineering, medicine, and free thought in all its forms...movies, painting, poetry.
The only thing holding this country back from enjoying a long stretch of uninterrupted Halcyon Days is hypocrisy...that failure to recognize, accept, and act on truth. Financial farmers would do well to concentrate on identifying ownership opportunities where truth reigns paramount.