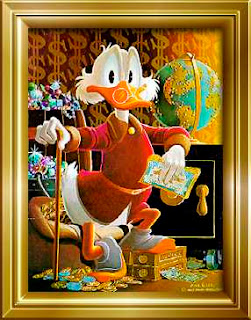 In regards to "The Coming Global Wealth Tax," the silence heard from the IMF's proposal was in actuality a collective gasp from billionaires worldwide. As even a cursory reader of "Rich Dad, Poor Dad" knows, the way to wealth is through ownership of corporations that use advantageous tax rates on capital versus income derived from labor. A certain oracle of Omaha is first in line to popularly endorse an eponymous rule championing higher incomes taxes, but it is truly the audacious billionaire indeed who would step forward to pay a wealth tax. Consider the consequences, nearly every "non-profit" would shutter, "giving pledges" would be upended, and generations of dynastic privilege would have to find meaningful employment. If anything ever so draconian as a wealth tax were to occur, just make sure to do it retroactively, otherwise the food banks will be filled with broke billionaires.
Posted by Tom Rapko at 10:19 AM