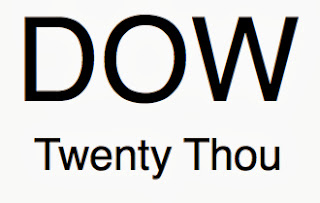 At some point during the next 3 years, the Dow Jones Industrial Average should hit 20,000 assuming even moderate growth of about 8% per year.

Although it has proven almost impossible to precisely forecast the financial future, and investors know that markets rarely act with linear frequency, I believe the stage is set for Dow 20,000 based on three factors; compelling strength in corporate earnings, sustained low interest rates, and a marked improvement in the employment picture. Even assuming Washington, D.C. continues in a state of relative gridlock and political angst, investors should still be on solid ground.

We are currently in the midst of the 4th or 5th (depending on how you calculate it) best bull market since the 1920s and, surprisingly, we're not too long in the tooth on a relative duration basis.  There is a distinct possibility that this rally continues and becomes one of the ALL-TIME best bull markets. Given the relative political stability for the next 3 years, systemic changes in the banking sector that have been implemented, and finally a surging "IPO 2.0" environment, this current bull market has many good things going for it.

With easy money still flowing from the Federal Reserve, I see two industries in particular generating significant growth; technology and medicine. From a technology perspective, many companies are laser-focused on the fast-growing mobile sector. With a worldwide population approaching 7 billion, mobile technology is at the forefront of capturing users and revenue. The same can be said of the pharmaceutical industry that has successfully prolonged lifespans throughout the world. Additionally, there are many, many exciting nascent sectors in the economy such as 3-D printing which may lead to a fundamental paradigm change in manufacturing. Finally, as the economy further improves, there is a distinct domino effect on employment; as more workers simultaneously enter the work force (new college grads, the "re-skilled" unemployed, laid-off employees) AND leave the workforce (starting up new companies.) Both of these scenarios should fuel further growth.

What could possibly spoil the farmer's harvest? I see two things on the horizon that are very troubling; the first is the growth of unfunded pension obligations and the mother of all sociopolitical wrangling, the health care system in this country. Unless we can adequately address both of these topics, they stand to possibly derail this rally and cause lasting damage to our great nation.

The Federal Reserve will probably continue to inject billions into the bond market well into 2014 and beyond. There is little doubt this country will have sustained low or very low interest rates well past 2016; the consequences of making any preemptive moves prior to a sustained recovery in the housing, employment, and manufacturing base would be disastrous. I suspect that rates will remain artificially low until a significant inflationary target is exceeded. With that said, the only other major concerns that arise are geopolitical; those are by definition almost impossible to predict and typically have fracking effects throughout the world (Chinese airspace, Iranian enrichment, and the rise of conflict in Africa for example.)

Those hoping to Invest Like A Farmer should absolutely expect at least a dozen or so 3-5% corrections and most likely a pair of 10% drops along the way to Dow 20,000; as mentioned previously, the market rarely follows a linear path. If you plan to buy and hold, it would serve you well to have adequate seed capital in reserve as it has proven fruitful in the past to add to quality positions when there are inevitable dips. Invest accordingly, and as always, it behooves the prudent financial farmer not to get in the way of this "compounding machine" known as the stock market. Let Mr. Market do his thing.