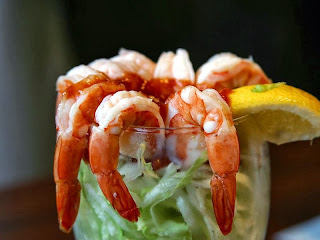 Sadly it appears that shrimp inflation is upon us. A recent report has identified a spike in the price of shrimp in the high teens and land-based protein inflation running into the mid-single digits. Indeed, even a basket of groceries notched a 2.4% increase in the second quarter. For an economy in many respects still emerging from the 2008/2009 financial crisis, this isn't good news.

We're now seeing solid evidence of food inflation. Add that to increases in health care costs, housing, and most notably eduction, and we have the beginnings of an inflationary environment. Some argue true inflation is currently running in the mid-single digits; if your personal consumer price index (CPI) includes food, housing, medical care, and education it probably is, if you prefer to use the established CPI like the Federal Government of tons of soybeans and computer processing power, you probably haven't seen a cost of living increase in decades.

Although the prospect of shrimp inflation may seem laughable to many readers, those who wish to Invest Like A Farmer should pay heed to inflationary signals, even in such small data points as shrimp; these can have jumbo implications for the financial farmer. Inflation eats away at your real returns; even a 27% increase in the S&P 500 eventually succumbs to inflationary pressure. This has the possibility of impacting both the wallet and palate of the average investor. Inflation is truly an enemy of the Republic and is most notably the sign of a fiscal and monetary policy run amok.

I read this shrimp inflation report as a solid signal that wholesale food costs are going to be rising markedly, which means REAL purchasing power is decreasing. The ability for retailers to pass along price increases depends largely on the type of customer; large chain-based restaurants are going to have trouble passing along meaningful price increases, whereas higher-end restaurants will have considerably less pushback. Along those lines, the same school of thought should also hold true for grocery retailers; the high-end retailers should have the ability to pass along prices increases whereas the lower-end shops are going to see their revenue and profit lines narrow. Keep in mind however, this isn't the whole story; inflation is insidious in that it has butterfly effects among asset classes.

Luckily, it appears that energy costs (especially in North America) are falling. Recent news out of Mexico indicating a push towards privatization of many of the resource-rich country's fields may further increase the supply and push prices down further. Notably, we're also seeing significant production increases in the United States which suggest even more pricing pressure to the downside. This impacts food pricing positively, meaning theoretically in North America it should be cheaper and cheaper over the coming years to product land-based protein and potentially harvest more ocean-based protein at a lower price point.

Nonetheless, I would argue that shrimp prices are a useful leading indicator similar to the lipstick index; it is something we at first smile and laugh about, yet often proves to be a harbinger of things to come.
Posted by Tom Rapko at 2:40 PM