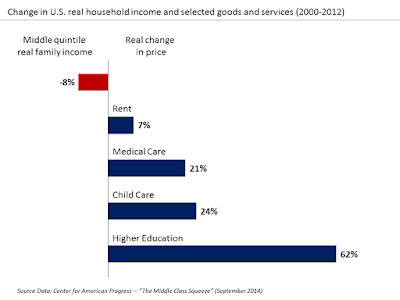 It is often said a picture is worth a thousand words, so financial farmers I encourage you to click and expand the above picture depicting the "Middle Class Squeeze."

If you feel like you've been working harder than ever just to pay for basic life needs like rent, medical care, child care, or higher education well...you have. Over the past twenty years real family income has fallen nearly 10% while costs of essential services have skyrocketed.

Much of the plunge in real income is due to the complete and utter destruction of the traditional manufacturing base. Productivity remains at an all-time high, but the jobs have disappeared. It is analogous to a cluster of neutron bombs going off in multiple cities across the United States, particularly in areas succinctly defined as NOT coastal America.

Technology is great...until it gobbles up all the manufacturing jobs and essentially hobbles an entire class of people. Probably the greatest article I've ever read about this ongoing phenomenon is entitled "Why Software is Eating the World" originally published in the Wall Street Journal on August 20th, 2011. If you do one thing today (besides read my blog of course!) please take a moment to read that article. It is brilliant.

Wealth creation, and concentration, has largely come at the expense of higher-paying middle class jobs. What I term the "technorati" (or in stock market parlance FAANG...Facebook, Amazon, Apple, Netflix, and Google) have swelled in market capitalization to ENORMOUS levels. But it's not just FAANG...the list can easily include any number of their peers: Adobe, Microsoft, etc. Even "new" startups like Uber and Airbnb largely leverage existing infrastructure (cars and homes) to derive profits as a software company. They manufacture nothing, except benjis.

Obviously shareholders, and in particularly founders, have made tremendous profits. But at what cost? It is going to be nearly impossible to to rebuild the middle class base in my opinion. If anything, there will be further wealth stratification into binary classes; the "Alphas" and the "Betas." Upward mobility has basically stalled for an entire generation, save for those smart and lucky enough to latch on like Velcro to the runaway tech horse.

A potential solution is tricky in a democratic republic that values, indeed prizes capitalism, and loves a Horatio Alger story in every successful person. The reality, however, is starkly different. Dynastic wealth is alive and well...and growing across the political spectrums...and that is the true enemy of meritocracy in the world.

The middle class has the votes and needs to elect pragmatic politicians willing to broach traditionally taboo subjects like true inflation (the Federal Reserve calculates inflation in tons of soybeans rather than legit metrics like housing, education, healthcare), tax avoidance (via "non-profit" foundations which collectively have avoided billions in taxation), and monopolies which clearly violate the Sherman Antitrust Act. Unless the middle class acts, the shenanigans will continue; wealth will concentrate amongst the top Alphas leaving a proverbial ocean of Betas to fuel them.