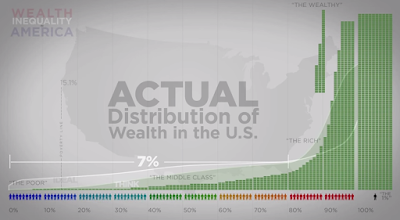 By 2020 the United States population is estimated to reach 340 million, but of that total some 300 million people will effectively be serfs; low-income, low-wealth members of a caste with limited social mobility. It will be nearly impossible to escape serfdom as wealth permanently consolidates amongst the richest ~10% of the population.

How do you avoid becoming a serf? Landowners from medieval times to now have fared well; the "lord of the manor" typically doesn't wind up becoming a serf, although it can happen if land ownership rights are abolished (think Soviet Union or China during their respective communist purges of the 20th century.) Education is key. Owning assets (cashflow positive) is vital.

Recently hedge fund billionaire Ray Dalio has identified this disturbing trend as being the result of two distinct economies in the United States; he is 100% right, but miserably late to identifying something that this blog pinpointed years ago. Mr. Dalio, however, is the lone billionaire voice this author has read even remotely advocating for a wealth transfer to protect the social order. Don't bet on it though, as hearty readers of this blog know, the Forbes 400 control vast amounts of global wealth disproportionate to their net value to the world...and along with that they control the politicians and media outlets. Make no doubt, the game is stacked.

The simple solution is to retroactively establish equity accounts for USA citizens composed of common stock transferred from ultra high net-worth individuals (say net worths of $500M+ are getting a hair cut.) Think of this as TRUE Social Security: shares in Google, Microsoft, Apple, Amazon, Facebook, Berkshire Hathaway, etc. are transferred into a retirement savings account for every USA citizen. The very companies that have been allowed to establish monopolistic businesses in the United States (and often globally) help restore the Middle Class. I think voters would be a lot more excited about $100,000 appearing in a bona fide personal retirement account than a measly $1300 tax savings proposal.

Under the guise of philanthropy many billionaires are stashing their stock in non-profits, which allow them to maintain control (or their heirs) with beneficial tax treatment (read: no taxes). This does little to benefit the Middle Class from which these billions are siphoned. A strong Middle Class is good for everyone, even the ultra rich.

But real farmers don't complain, and that's not what this blog is all about...so discard the idea of wealth transfer and instead think about wealth creation and protection. Wealth creation is the product of owning assets that are cash flow positive, beneficial tax treatment, and protection of said ownership interests. The future isn't going to belong only to those who can code, but also those who can secure a solid asset base composed of real estate, equities, and education. Seek these out for yourself and the ones you love, because the monopolies grow stronger by the day.