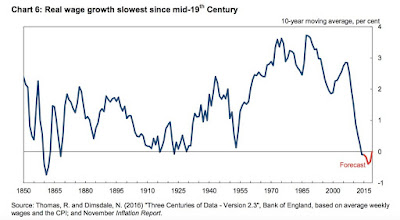 The Darwinian battle for survival has a lot to do with EXCEEDING the Jones, rather than just keeping up with them. Traditionally what has been a pillar of the American Dream is the belief that one's children will have a better life; better education, access to opportunities, health, etc. Indeed, it was John Quincy Adams who remarked that "I am a soldier so my son can be an engineer and his a poet." How does that translate in today's society?

Reality dictates that to achieve this goal of a progressively better life for ourselves, our children, and their children one major accomplishment MUST be achieved: growth. By definition, the Earth has limited natural resources, and as humans our time is probably the most valuable resource. Along those lines, maximizing time (surviving) is paramount to achieving growth. And there is a very specific definition of growth I like to use fellow financial farmers: making sure your portfolio is growing consistently in EXCESS of true inflation...which I estimate is easily in the double digits.

Double digits? How could this be? The Federal Reserve is HOPING that their metrics indicate "inflation" rises to 2%. Please take a look at the chart above illustrating historic real wage growth and notice something really, really nasty occurred around the year 2000. That's essentially when the internet really began to take off, and was quickly followed by major world events including a massive recession and multiple global wars. The global economy's PRODUCTION has more than recovered in the nearly two decades since, but the real wages haven't....and neither have the jobs. 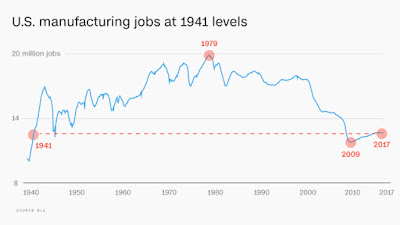 Real wages have remained stagnate and U.S. manufacturing jobs are at 1941 levels. Explosive growth in productivity hasn't benefited the typical line worker at all. The number of jobs has collapsed and compensation long associated with those jobs has vaporized...it has been replace largely with the rise of a massive service sector dubbed The Gig Economy. The problems with The Gig Economy are legion; no pension, limited healthcare options, and low wages. Where is all that "productivity" i.e. prosperity going? To the owners of said businesses, who are typically either private equity concerns or publicly traded companies both of which have founders with stratospheric wealth.

So how you do position to win? First, throw out the 2% inflation dictum championed by the Federal Reserve. Second, put a personal growth plan together that targets a sustainable, LARGE growth rate in excess of your true inflation (cost of housing, healthcare, education, etc.) Third, implement said plan. There are multiple industries with stratospheric growth...I know where they live, and so will you after some research. Give me a call if you need help finding them. Look at those industries and professions intensely from both an employment perspective and ownership mentality. The future remains very bright for those pursuing ownership interests that are laser-focused on generating cash flow...and there's nothing to say you can't love what you do and benefit the world while you do it. If you want to position yourself to win big-time, formalizing a growth plan and executing it are essential...Invest Like A Farmer.