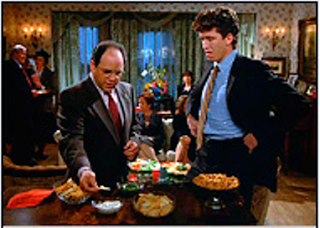 Double-dipping is a really bad idea in the time of Covid and equally painful in economic terms as well. In the culturally-definitive series Seinfeld, George is caught at a funeral double-dipping (dipping a chip that has already been dipped and eaten) in the sour cream. My elite friends at Harvard have taken the trouble of analyzing the danger of this possibility in detail. You can read their analysis here: "Double Dipping" Dangerous or just...icky?
Although a fervent Seinfeld fan, my interest is more along the economic terms. In particular, I'm wondering if we're setting up for a double-dip recession that will put a nail in the coffin of American small business owners (and the middle class.) Historically, a double-dipper has been defined as a recession that begins prior to the previous one ending. If we were to see a fall in GDP over two consecutive quarters that would qualify as the first (check that box), but it seems like GDP is recovering, right? Well...if you believe the "science" (and shut-up if you don't, a la Andrew Ross Sorken debating Rick Santelli) the 3Q GDP accelerated and we're out of the woods.

But look around the woods. Do you see a lot of small businesses open? Or people starting up new businesses? Any new coffee shops open up in your neighborhood? Or just the long, long lines at the Starbucks drive-thru? Is your local handyman killing it or is he hanging out at the full Home Depot parking lot? How about those local mom-and-pop retail stores? You remember them, right? If you can get past the traffic jam of UPS, FedEx, and Amazon delivery vehicles their shops are all boarded up on Main Street.
We're in the midst of a Dickensian recovery; in particular a Tale of Two Economies...one economy is bust. They were previously small business owners who owned restaurants and hardware stores and retail shops in your town's shopping areas. They've either been Covid-slammed or looted or both. The other economy, however, is a booming. Large capitalization companies are killing it; their infrastructure, logistics, capital, and political contacts have not only allowed them to survive, it has almost single-handedly allowed them to thrive.
So when we talk about a double-dip recession, it is important to realize that there are two distinct economies at work right now; the small-business, family-owned company that has suffered greatly during Covid and the recent political chaos, the other is the monopolistic business with strong balance sheets that has cannibalized the consumer's buying power.
So in answer to the original question of whether we will experience a double-dip recession, my answer is that it is almost impossible that we don't; the dry powder typically used to bail out the middle class has largely been spent, ie the Fed Funds rate is already at 0%. The only thing keeping the economy afloat right now are sky-high real estate prices and a stock market at all-time highs. But these factors bedevil the fact that the U.S. Dollar has pretty much collapsed in terms of buying power. Anything of value, whether it be education, health care, or housing are at highs. Money is flowing into physical goods.
I suspect the end-game will be further erosion of the middle class and more dependance on government programs. The billionaire class will be the net winners. Raising taxes, punishing work, and increasing bureaucracy is not going to be helpful, unless the goal in an anemic recovery similar to 2009-2016 numbers. But that's what I think will be served for dinner; cold burgers and flat soda with a paper straw. The appetizer bowl of salsa with a bunch of chips floating on the surface will be the least of our problems.