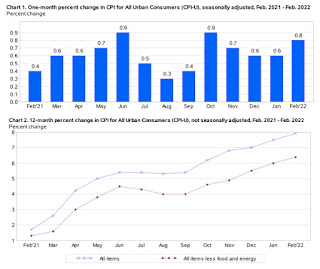 Mr. President, please stop lying. On Thursday the U.S. Bureau of Labor Statistics released the Consumer Price Index. "Over the last 12 months, the all items index increased 7.9 percent...the 12-month increase has been steadily rising and is now the largest since the period ending January 1982." That's 40 years fellow farmers, 40 years! Is a recession next?
In the face of rampant inflation, demand priorities shift to essential items a la a "Maslow's Hierarchy of Needs." So although unemployment is at historically low levels, the jobs aren't necessarily higher-paying. So once the purchasing barrier develops it will be hard to prevent negative GDP growth; ie consumers will focus on staples like food and housing, cut travel consumption to the bare minimum, and look for alternative means of entertainment. Pot and streaming services come to mind as the ultimate crutch for a large swath of the population; remember, politicians have a vested interest in keeping the "Bread & Circuses" running.
There is a great line in Seinfeld where Jerry asks George to teach him to lie like him. George shrugs and tells Jerry "That's like saying to Pavarotti, 'Teach me to sing like you.'" But he continues with this sound piece of advice Joe Biden has internalized: "Jerry, just remember. It's not a lie, if YOU believe it." That's where we are right now...data doesn't matter, truth is subjective, and the future is rosy. Just not for the middle class.
Posted by Tom Rapko at 1:19 PM