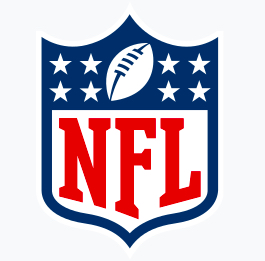 Few organizations have a license to print money, the NFL is one of those organizations. It also owns at least one day of the week for ~6 months (September-February), and increasingly some Mondays and Thursdays as well. The 32 teams that collectively make up the "trade association," yes they were actually considered a "non-profit" up until 2015. This former non-profit will generated some $9.8 Billion in revenue, coming to about $309 million per team. The growth over the past 10 years has been impressive. 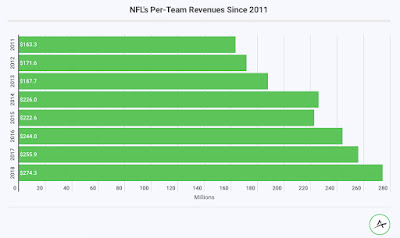 Those are at least the numbers we can gleam from working backwards on data provided by the league's only publicly traded team, the Green Bay Packers. This wellspring of cash is undoubtedly much, much higher as "off-balance sheet" revenue from marketing deals is most likely a multiple of the actual reported TV revenue numbers. The bottom line is that there are probably only 3 people in the country who know exactly how much the NFL is really generating.  And amongst the treasurer, secretary, and commissioner of the NFL, the Commissioner reigns supreme.
Using a typical software multiple of 35, and assuming the true revenue is probably on the order of $50 to $100 billion, the NFL would rank as one of the most valuable companies in the world, on par with Apple or Microsoft or Google or Facebook or Tesla. It definitely has that level of sway in the corporate world as sponsors fight over placement in the never-ending cavalcade of commercial during a typical game.
Where do Americans learn about new cars? Football games. Where do Americans learn who has the best 5G coverage? Football games. Where do Americans learn how to gamble? Football games. This list is long and the influence is strong; if it is advertised during an NFL game there WILL be an ROI on the product or service. Indeed, some of the most iconic ads of all time have been placed during the Super Bowl.
Last year's Super Bowl average ad cost $6,000,000 for 30 seconds, generating nearly HALF A BILLION in single game ad sales alone. But really, what price is too much for marketing immortality? Consider arguably the BEST Super Bowl ad of all time, which is a bold statement, but this ad appeared only once. And it changed the world:

So maybe changing the world is a good thing, but the flip side of the coin is that the NFL in many ways HAS become 1984 dictating societal norms without ever defining why, pandering to powerful unelected mobs with nefarious goals, and oligarchs siphoning away dollar after dollar of income off the masses. This makes the NFL in many ways the "Circus" of the proverbial "Bread & Circuses" popularized in ancient Rome for keeping the populace in line. Are we much different today?