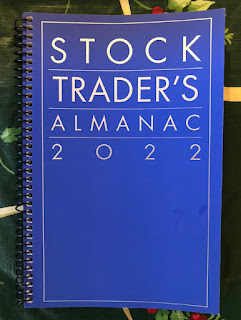 Although the old Wall Street quip is to never believe that "past results are indicative of future performance," my Stock Trader's Almanac 2022 (similar to the Farmer's Almanac, but specifically devoted to the stock market) is flashing some serious warning signs.
Consider: "Every down January on the S&P since 1950, without exception, preceded a new or extended bear market, flat market, or a 10% correction." We are definitely NOT doing well out of the gate in '22.
Also: "...the second year of new Democrat presidents have been down -2.3% on average."
Finally there are *kinda* a couple other concerns: 1) A raging Covid variant named Omicron which is sweeping across the world at hyperbolic infection rates. 2) Inflation that is almost off the charts (we have to go back to the  late 1970s/ early1980s for similar data points during the Jimmy Carter Administration.) 3) Mid-term elections which promises to be every bit as cantankerous at the last Presidential Election.
What is an investor to do? Head for the hills and bunker down? Withdraw cash from your own savings accounts in amounts less than $10K so the government doesn't put you on a suspected money lauder list? Buy more toilet paper? No I say! Rather consider the following course of action: Remain employed if possible and continue to purchase assets (things that pay you to own them) and keep physically fit.
The stock market, and the entire world for that matter, has almost universally survived and prospered on the back of growth...meaning the survival of individuals and companies via increased earnings in one form or another. A large part of this growth over the past 50 years has been due to the integrated circuit. That has spawned the technology to vastly improve the lives of billions.
The "Age of Silicon" is not over by a long-shot, as growth in medicine, manufacturing, engineering, teaching, and yes even Wall Street is underpinned by the ability to increase speed, accuracy, and quality while at the same time lowering cost and barriers to entry.
So although there are multiple bad omens on the horizon, keep faith with the prospect of a better tomorrow...whether that is next week, next month, or next year. High volatility in Covid, the markets, and even politics does not last. Hopefully all three will moderate in the coming months. Until then, as financial farmer focus on accumulating assets, increasing your cash flow, and keeping physically fit. Life is a marathon.