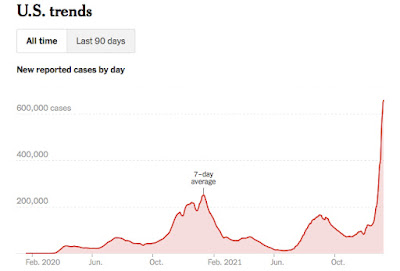 The recent Omicron Surge is eerily similar to the Volatility Index in the U.S. Stock Market, so similar in fact this author is willing to step out on a limb and predict that just like sustained high volatility, sustained Omicron is nearly impossible. What does this mean dear readers? The end is near for the pandemic. 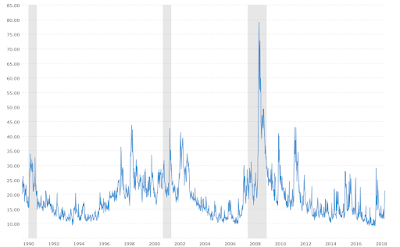 How do I have the gaul, the IQ, the "je ne sais quois" to make such a bold statement when the likes of Anthony Fauci, the CDC, NIH, USA Govt leadership, not to mention the entire (mostly) media establishment has not broached the subject? Math my fellow financial farmers!
Extreme volatility is similar to extreme spikes in almost every natural event; it takes extreme energy to maintain extreme deviations from the mean. And nature abhors sustained deviations from the mean. Let me say that again just for good measure: Nature abhors sustained deviations from the mean.
With the Omicron variant now surging to over 1,000,000 (1M) case per day, the White House narrative has changed dramatically over the past several weeks from "We will defeat the virus!" to "Contain the virus!" to "Embrace the virus!" Immutable natural laws are impossible to defeat.
History, I believe, will show that the vaccines acted as a significant and worthy speed bump which prevented millions of deaths, but probably more importantly, bought us time as a nation, as a species, to be overcome by a third wave of intense infectiousness and lower lethality. Reversion to the mean is my expected result.