Jeremy Grantham believes we are in the fourth superbubble of the last hundred years. He has many valid points and raises the specter of an utterly dismal 2022. Already we are down the first 3 weeks of January, and history shows that with almost certainty a down January results in a down year (.732 batting average.) With a handful of exceptions, notably massive Federal Reserve bailouts, this has always been the case. Grantham, however, takes it one step further than rule-of-thumb Wall Street adages and formulates a thesis on the simple premise of mean reversion.

Mean reversion describes just what it implies; that there will be a return to the average growth rate over time. Yes the growth rate itself might change over time, but sustainment of extremely high deviations from this average are difficult, if not impossible, to maintain over longer and longer periods of time. Typically they come in "bursts" that spike up (or down) in sharp, unstained points. Consider one of the best baseball batters in history, Ted Williams.

With a lifetime batting average of .344, Williams is arguably the best batter of all-time. He finished his career as the last batter with OVER a .400 average...that was almost a 20% deviation from his mean. Over long-enough careers with enough data players can be predictable, hence the rise of the current "Moneyball" climate of assembling a team on pure statistics. The stock market has even more statistics and a greater database to glean from for investors than baseball.

Consider the chart below, which identified 3 of the last 4 superbubbles and makes a prediction for the current situation: 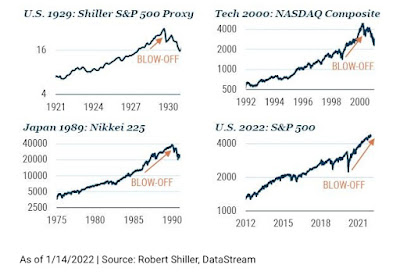 According to Grantham we're overdue for the next "blow off" from the housing, commodity, bond, and equity volcanic peaks. He even has a nice quick-reference rule set to follow:

The only caveat keeping the markets going, according to Grantham, is the paradigm shift we've allowed ourselves to believe in regards to markets (all of them) never falling and always going up. No matter what. Now almost all reasonable financial farmers know that this cannot be; we look outside the window and see the weather change by the minute and so it is with the economy as well.
There is no doubt that Wall Street has been shedding risk like a snake molting skin. Case in point is the complete liquidation of stocks without an "E" in the P/E ratio...take a look at symbol ARKK for example, which is Cathie Wood's Ark Innovation ETF. That portfolio is composed almost exclusively of higher growth, lower (no) earnings companies. It has been dealt a severe blow in the past 6 months, and increasingly in the last month, as investors dump the speculative sector and plow right into the blue chips.
Grantham believe that this too will not matter when the reckoning comes because there will be an epic blow off taking down multiple markets simultaneously. It might be time for investors still riding high from recent valuations surges to round up some cash. Assets (things that pay YOU to own THEM) always seem to be in vogue, regardless of market conditions. But speculative "assets" without adequate reserves or more importantly paying customers might be in serious trouble.
The big winners in history when bubbles pop are those with little to no debt, and an abundance of liquid cash. They have the ability to buy on the cheap when there is blood in the streets. Prices are high. Inflation is high. BUT high(er) paying jobs are still plentiful. If that final paradigm shifts, watch out below.